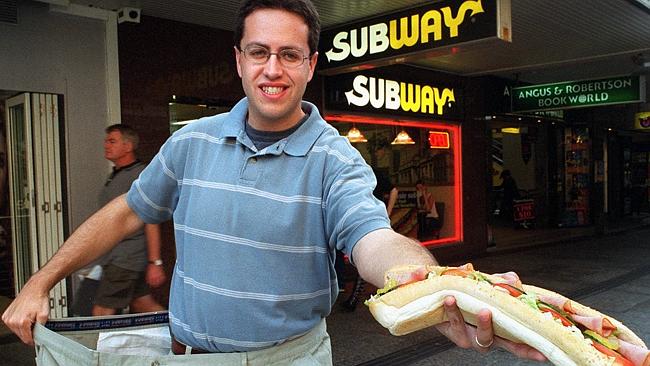 SAY BYE-BYE! The FBI Just Subpoenaed Jared Fogle’s Text Messages and You Will Be Shocked At What They Reveal. It looks like Subway did not act too soon. I started to have bad feelings about contributing to the destruction of a possibly innocent man…until now. The FBI subpoenaed and affidavit between Jared and a Subway franchisee owner that revealed that he had sex with a 16 year old girl and confirmed his attraction to young girls in general. This is the 2nd woman to make these accusations and provide text evidence.

This all happened back in 2008. The Franchisee owner said she had met Fogle at a Subway event. The two begin texting and when things got over-the-top weird, she decided to get her lawyer involved to make sure that she was protected before going in to complain to Subway’s management. In doing so, her attorney recorded the messages from her phone and verified them by a notary official. The website, Business Insider, verified the messages and that the phone number by which the messages originated was indeed registered to Jared Fogle.

The Franchisee owner and Jared were actually seeing each other when Jared began to ask her to post on Craigslist asking her to have encounters with other men and he would watch.  He told the woman that she could earn $500 an encounter.

WHAT DID THE TEXTS SAY?

This is the good stuff. Along with the Craigslist request, he also wanted to hook up with her under aged cousin. It wasn’t clear how old the woman’s cousin was. Here is how it went down:

JARED: When can we find a time for me to talk to your cousin?

JARED: Any more news with your cousin? Tell me what u think about when u think of the three of us all together???

FRANCHISEE OWNER: Is this the same website you found that 16 year old girl you that you f*****? …I still can’t believe you only paid $100 for her.

FRANCHISEE OWNER: What part of her ad made you think she was selling sex?

JARED: U will have to read them to see.

ALLEGEDLY THE WOMAN TOOK THIS TO SUBWAY;

She says that she went to Subway but Jared is not an employee of Subway so no action was taken. He is someone they pay for advertising. She then requested that they remove all her Jared advertising material from her store.

Subway says that they have no record of this allegation. However they said if they are true that they are Appalled. They sent out the following tweet yesterday. Jared having sex with a 16 year old, albeit creepy is not actually illegal in Indiana where Fogle lives. However paying for it is. The FBI now will request to have access to all of his phone records and will probably be able to link that with the computer records and Jared will be toast.

Now that’s two women who have come forward and this is starting to gain momentum. I suspect Jared will be looking at some formal charges soon. Right now he is a free man and has not been charged with any crimes except being an alleged creep.  Subway will feel better about their quick decision to drop Jared as they began to take some heat for dropping Jared within hours of the news of the FBI raid.  On their facebook page consumers wrote: Yes.  However he was in between marriages in 2008.  His first marriage lasted from 2001 – 2007 and his second marriage began in 2010.  Therefore in 2008, when he was texting and in a reported relationship with the female franchisee owner, he was not cheating on his wife.  So you can not add adulterer to his growing lists of descriptors.  Follow us on Facebook for updated info as things unfold.