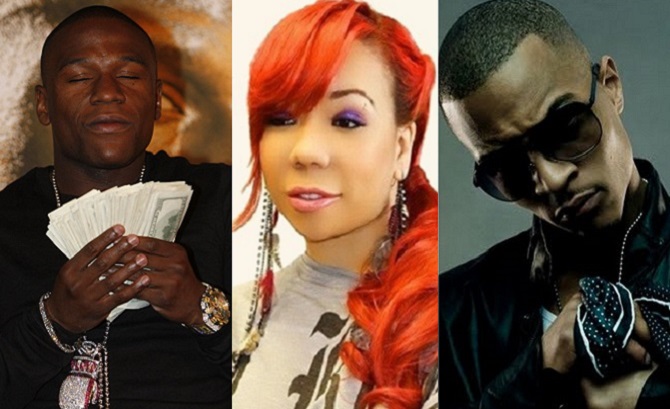 This all goes back to that infamous picture that TINY took with Floyd on Halloween at Mariah’s party.  You remember this right?

Fans immediately started to call TINY out for being disrespectful to T.I. and she was quick to dismiss the entire thing as “nothing”.

She basically said that she was forced to take the picture as she was leaving and that she didn’t want to say no to Mariah.  The attention got to be so much that she had to release the following statement, She also gave a video account of the events to TMZ.   She had me convinced.  Watch!

What we didn’t know was that not only was there more interaction between Floyd and TINY but that interaction was caught on tape.  Floyd was just being a gentleman and not wanting to cause any issues, decided not to release the footage….until now.  Simple Photo?? Really?

It appears that TI is out with some friends at dinner.  Some of those friends just happens to be Kevin Hart.  If you listen you can hear Kevin Hart making fun of Floyd and his father.

That is what Kevin does for a living, so he sort of gets a pass.  T.I. didn’t have to be the one to post the video…but he did.  If I’m Floyd, I’m definitely not happy watching this.  It’s pretty brutal.  If I’m Kevin Hart, I’m not too happy either.