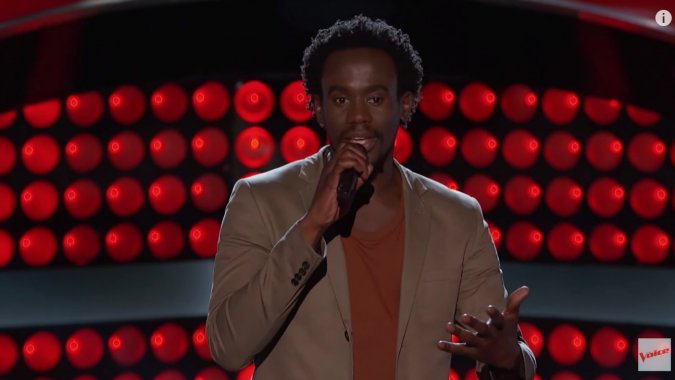 Riley was on the latest season of the NBC show, ‘The Voice’, and clocked the fastest four chair turnaround in the show’s history.  He wasn’t just a contestant but a front runner on Pharrell’s team, and a fan favorite before pulling himself out of the show.

DETAILS OF HIS DEATH

The news of Riley’s death actually came via social media. Shortly after the rumors hit the internet, a man named Robby Parsons, who claimed to be Anthony Riley’s best friend confirmed the death to Yahoo Music,

Anthony passed away Tuesday. He wasn’t found until [Friday].  His sister called me at 7:30 yesterday to tell me, ‘I called the friend he’d been living with, Bobby Iovine, and Bobby was in tears. And he said, ‘Robby, it’s true.’

Anthony was a gentle soul. Just a loving, caring, gentle person, is what he was.

Parsons also confirmed that Riley’s death was an apparent suicide.  Riley was a famed street performer in Philly who had issues with substance abuse.  He could be seen performing on the streets outside Reading Terminal, Penn’s landing and Independence Hall.  All busy spots located in the Philly area.

ANTHONY RILEY WITHDREW HIMSELF FROM ‘THE VOICE’

On Season 8 of the voice, after his epic four chair turn around, he also won his first battle, defeating Travis Ewing by singing the old Motown classic “Get Ready” by The Temptations.

Before the next battle Riley quit citing “personal reasons”.  This created a social media frenzy with conspiracy theories surrounding the real reason he quit.  Some thought he was terminally ill, others thought he might have been asked to leave after posting a tweet dedicating his Battle Round performance to Mumia Abu Jamal, the former activist who was convicted and sentenced to death for the December 1981 murder of Philadelphia police officer Daniel Faulkner. All theories proved to be untrue.  Riley revealed the real reason himself, admitting that he had been dealing with drug addiction over the last two years.  He said that he told the producers of The Voice after his battle round win and they flew him to Philadelphia and admitted him to a Pennsylvania based rehab center called Clarity Way.  NBC footed the bill and had no hard feelings.  Riley said that they were great,

The Voice has been a really great source of support.  At the time, [being on the show] wasn’t working for me and I felt like I needed to go, instead of taking on more responsibility than I could handle.

It appears that Riley was trying his best to get help.  Our prayers and thoughts go out to his friends and family.  Watch the clip of Anthony’s four chair turn around!  R.I.P.

We also have his battle round win….The boy was good!!