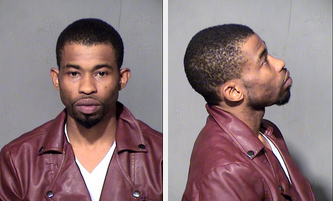 Celebrity Superbowl Arrest: Markus T Paulk. Myles From Moesha, is that You? While most celebrities were partying it up, drinking, smoking and doing God knows what, those same celebrities were also smart enough and perhaps rich enough to either not break the law, or not get caught.  Markus T Paulk (and Warren Sapp) are unfortunate exceptions.

Marcus used to be everyone’s favorite little brother. He played Moesha’s bratty but cute little brother Myles. As you can see from the mugshot, Myles is not so little anymore. He was arrested on Sunday for DUI and drug possession. Those are two big boy offenses. The 28 year old was pulled over after the vehicle he was driving came too close to emergency vehicles that were at another stop. Once he was pulled over officers gave him a field sobriety test which he failed and then a breathalyzer in which he blew a .109. He then confessed to drinking Hennessy that day and smoking pot.

Friday he was excited for his weekend. He sent out the tweet

“What’s up #phx #az #scottsdale what that #Super Bowl life like.”

That was Friday.  This week he is wondering “what that legal-trouble” life like”.

This is not the fist time Paulk has had a run in with the law. After disappearing for awhile he made a reappearance in the movie Redtails in 2012, and then in 2013, with some money in his pocket, he found himself in trouble after kicking and punching his ex-girlfriend. He entered a plea deal and luckily didn’t have to do any jail time for the incident.

It might be just me, but it seems like young bratty brother Myles has grown up to be older dummy, douche bag Marcus.