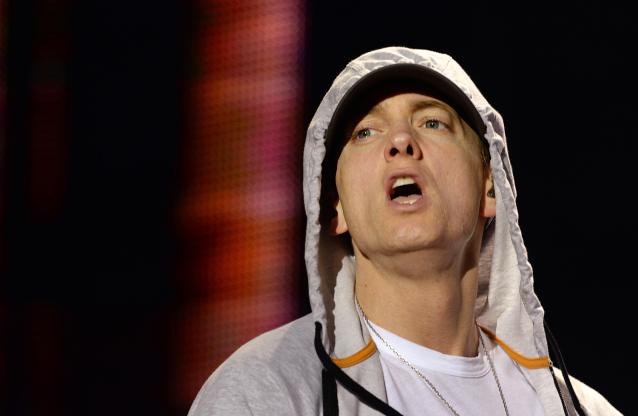 Yes, I am an Eminem fan.  Yes the lyrics are disturbing but so are most of Eminem’s lyrics.  Did you not listen to his first album?

The new song creating all the buzz is “Medicine Man” on Dr. Dre’s new long awaited album ‘Compton’.  Em is basically being criticized by one line in the song where critics say that he is amplifying conditions in which rape is normalized.  Karen Ingala Smith, who is the chief executive of a charity that supports women who have been victimized by men’s violence, says that the one line in the song was designed to dis-empower victims of sexual violence.

WHAT WAS THE LINE?  WHAT DID EMINEM SAY?

Here is the lyric that is creating all the hype:

Ain’t no one safe from, non-believers there ain’t none/I even make the b*tches I rape c*m.

In just under a week, this line has social media buzzing.  Karen Ingala Smith says,

Women and girls who have suffered sexual violence often blame themselves or question whether they were really raped. Peddling the lie that orgasm equals consent silences victims of sexual violence.

When we minimise, celebrate, glorify or condone men’s violence against women, we are amplifying the conditions in which it can occur. Lyrics like these contribute to a conducive context for sexual violence.

Other fans of Eminem also took to social media

@SpursDiva7 You obviously somebody who has only heard Em’s Recovery Tracks. This is TAME compared to his old shit

Eminem is in a can’t win situation.  New fans are sensitive to just about everything. Old fans love Eminem for being who he is.  Old fans remember when Eminem made a whole verse about a girl and an umbrella,

Sit down beside her like a spider, hi there girl, you mighta
Heard of me before, see whore, you’re the kind of girl that I’d assault
And rape then figure why not try not to make your p—y wider?
F–k you with an umbrella, then open it up while the sh–s inside ya
I’m the kinda guy that’s mild but I might flip and get a little bit wilder

I can probably pull 30 Eminem lyrics that make that line in “Medicine Man”, read like a Dr. Seuss book.  If Eminem softened his approach, old fans would call him a sell out.  If he doesn’t, new fans will kill him on social media.  Since being who he is, got him where he is, I hope he doesn’t change.

Eminem’s past stuff was just entertainment.  It still is, but people are having a hard time separating entertainment from reality.  For the music artist, it’s always been a double standard.  Idris Elba could play a sociopathic, escape convict and kill women in a movie and be praised for his performance.  Eminem writes half a line in a song and social media comes for his head.  If you are a true Eminem fan then you take it for Em being Em. His lyrics are dark but thoughtful, and we are able to separate the man from his works.  This is who he writes for.  If you are not a true fan then you might really be disturbed by the lyrics, you have that right as well.

I hope he doesn’t apologize and I hope the lyrics aren’t changed. If you don’t like it, don’t listen, don’t buy and don’t support. If we let social media determine what entertains us, we will be watching PG rated movies about puppies playing with kittens and piglets. What’s even worse, half of these social media commenters don’t even mean what they say, if they did they wouldn’t have listened to Eminem’s stuff in the first place. If they did, then any movie with rape or violence will not be in their Amazon prime “recently” watched folder.  If they did, then poor sales would speak for themselves and artists would be forced to change their content to survive. This isn’t happening because people are all 140 characters of pure talk!

Please do not try to misconstrue this post as supporting rape.  I’m supporting freedom of artistic expression.  If someone wants to paint pictures of black people being lynched or sing a song about it, good.  That song would not be in my playlist, they would not get my money or support in anyway. If Eminem wrote a song about how fun it is to rape girls, that wouldn’t be in my playlist either, and I would probably stop listening and supporting him.  A one line analogy certainly gets a pass. Your personal threshold is up to you.  If you are a fan from way back, then your threshold is probably a lot higher then those getting on and then off the Eminem bandwagon.

For those who are still with me, and still Eminem fans, here is a little bonus.  During his visit to Sway’s radio show, he dropped a classic freestyle. Nobody was safe from these lyrics.  He goes in on Miley Cyrus, compares himself to Bill Cosby and goes after Caitlyn Jenner.  Genius…..