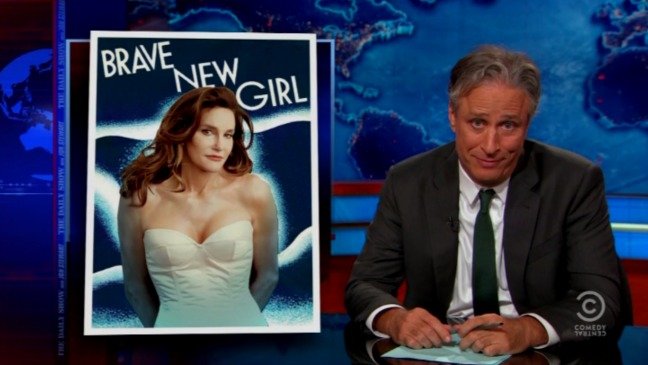 Personally, I’m already tired of all the Caitlyn Jenner hoo-ha. I think everyone making a big deal about it just highlights our actual lack of progression. I live in the NYC area, there are Caitlyn Jenners everywhere. Yesterday a man, today boobs and a corset.

However, no matter how saturated a story is, I am always interested on Jon Stewart’s take and as always, he doesn’t disappoint. The writers of ‘The Daily Show’ are geniuses. With the literally thousands of stories on Caitlyn, they found a unique, yet blatantly obvious story angle and nobody delivers it better than our man Jon Stewart.  There is a reason the show has won 18 Primetime Emmys and this 4 minute segment is why.

Stewart basically mocks the media, showing that when it comes to women, looks are the only thing that matters.  He sums it up best when he says,

Caitlyn, when you were a man, we could talk about your athleticism, your business acumen, But now you’re a woman, which means your looks are really the only thing we care about.

Guess what? He’s right. Here is the unofficial piece, we will update it with the official video when it’s made available.

BTW – Caitlyn does not look better then Kris Jenner or have a better body then Kim Kardashian. Media, you have gone way too far (unless you are into that sort of thing….not that there is anything wrong with that. #notjudging).