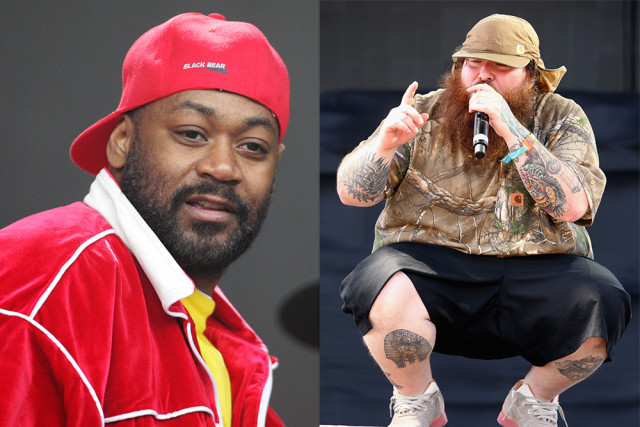 I’m not sure exactly where this is all going, but it’s very clear how it started. Just to let everyone know where I’m coming from, Ghostface is in my “Top 5 Dead or Alive”. I respect him as an artist and in my opinion his style is like no other. That being said, Action Bronson’s voice does sound like Ghost’s. This is where and how this Beef all started.

THE GENESIS OF THE BEEF

Action Bronson was on ESPN’s “SportsNation” and he was asked the question regarding the fact that he gets compared to Ghost face. Bronson then ignited the beef by saying.

“He’s not rapping like this no more”. Of course we have that SportsNation clip

If you think about it, Action was just being more honest then throwing shade, however it’s just more exciting to think the worse. In pure Ghost Face fashion he issues a response to Bronson. Personally I disagree with this whole approach but also see the merits in it. I will save my perspective as it will only make sense after you watch Ghost’s message. He is basically making threats on Action Bronson’s life with Teddy Pendergrass talking in the background on an old Harold Melvin and the Blue Notes track. Only Ghost Face could pull that off……

When ur wrong ur wrong and I was wrong. I apologized for the comments. I’ll always be a stand up human. Much love.

If only more people apologized when they knew they were wrong. — MR. WONDERFUL (@ActionBronson) July 20, 2015

We only moving forward. It’s a beautiful life.

Everyone says things they regret. I respect my elders and the forefathers of this art. Once again, I’m sorry.

CAN WE ALL JUST GET ALONG?

Kudos to Action Bronson for taking this approach. As we witnessed firsthand, Ghostface fans can not only be unreasonable, they can be unreasonably violent, (See video of fans defending Ghostface at a concert). Wu Tang fans are world wide and the last thing you want to do is be on the receiving end of a stupid fan that can’t tell the difference between real beef and studio beef. The sad part is that lawyers and police can’t tell the difference either. If something was to happen to Bronson, this video would be evidence and could possibly be used against Ghost. That same crazy fan that actually does set Bronson’s beard on fire could say that Ghost told him to.

There would literally be no upside to Bronson responding in any other way except how he did and it’s admirable that he was able to put his ego aside and apologize. Not saying he was right or wrong, but he did the right thing because an apology from Ghost was not going to happen.

Unfortunately, in order for this apology to stick, he will probably have to repeat it at his next 10 shows.  For Ghostface, putting out this video is free promotion. He has more buzz now than when he put out his last album….and I’ not joking. That video received over half a million views in just 14 hours. So as stupid as the video might appear, it was actually a good move for his career. He just needs to capitalize on it and put out a mix tape.

BUT HE DOES SOUND LIKE GHOST…..EVEN GHOST THOUGHT HE WAS HIM

In a clip from Vlad TV Ghost face Killah admits that even he heard a verse from action and thought he was him! How funny is that? Notice…..Ghost doesn’t disrespect Bronson.

This was fun…lets hope it’s over.