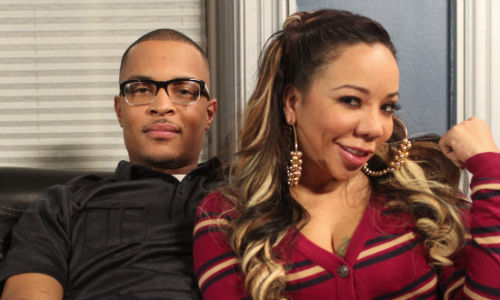 Oops!? T.I. Slips Up in an Instagram Post and Confirms He and TINY are Living Separate Lives Break up rumors have been plaguing their relationship for quite a while so this is nothing new, however, very few times is T.I. or Tiny listed as the source of the rumor.  So this time is different.

In response to a story that was originally posted by Sandra Rose, Tiny’s rep made a statement to PEOPLE that attempted to set the record straight once and fall all.

After rumors of the couple breaking up reached an all-time high, they released the following:

“Certain blogs have ‘reported’ that she’s going to be a single mom, she’s getting a divorce, she has a new residence and everything in between.

On behalf of Mrs. Harris, this is the truth – Tameka and TI are good. They love each other and they have a beautiful family with seven amazing children. For them, it will always be family over everything.”

Did you get that?  The fact that TINY has a new residence is just a rumor.

THEN A VIDEO OF TINY AND TI “PLAYING TOGETHER” SURFACED The picture you see above was taken in Vegas at a Halloween party that was thrown by Mariah Carey.  When this photo hit Instagram, people lost their minds.

Floyd and TI are known enemies so this was seen as super-disrespectful to TI.  Both TI and Tiny responded.  Tiny tried to quickly clear things up with this post Then TI basically hit them with the ZFG (Zero Fcks Given) response. SO THIS ALL LEADS US TO THE MOST RECENT SLIP-UP!

So let’s be clear.  There is no such thing as a social media slip up that stays out there.  If T.I. slipped up for real…..