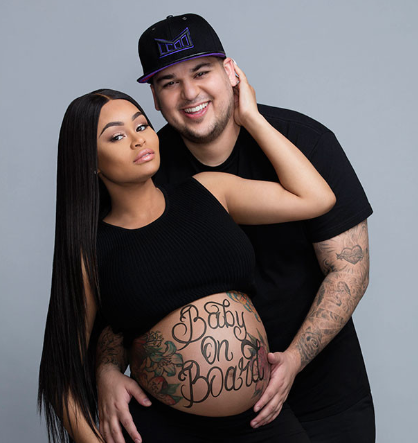 It’s All Happening! Rob Kardashian And Blac Chyna Arrive At Hospital For Baby’s Birth, Get All The Details Inside! (UPDATED WITH THE BABY’S NAME) Sources have confirmed that the C-section was successful. Both Chyna and the baby are doing just fine. Sources say the baby girl weighed 7 pounds and 5 ounces. She reportedly has “tons of hair,” according to this insider, who is probably Kris Jenner. Let’s be honest.

Oh and what is the baby’s name? Dream Renee Kardashian.

Another Kardashian will be entering the world today. Rob Kardashian and Blac Chyna have arrived at Cedars-Sinai Medical Center in Los Angeles ahead of Chyna’s C-section. You may remember that Chyna previously had a due date of November 16.

The C-section will go down at 8:30 a.m., and both Kris Jenner and her boyfriend Corey Gamble have arrived at the hospital. Earlier this morning, Rob posted an image of a stroller on Instagram with the caption, “We ready,” he then quickly deleted the post because he probably didn’t want a bunch of crazies showing up at the hospital.

According to multiple reports, they are trying to make a TV special out of this, but filming violates the hospital’s policies, so we’re not sure if they were able to work out a deal. I’m sure Kris took care of things. Wrote them a nice check, or threatened to murder an entire floor of patients. Don’t act surprised. You know Kris is capable of murder, especially when it comes to her fame and family.

This will be Rob’s first child. Blac already has one son with Kylie Jenner’s boyfriend, Tyga. It’s a strange situation, and it’s only going to get more bizarre once another child is added in the mix.

We’ll update this post if they release any photos or details about the health of Chyna and the baby later in the day. Congrats to the happy family!