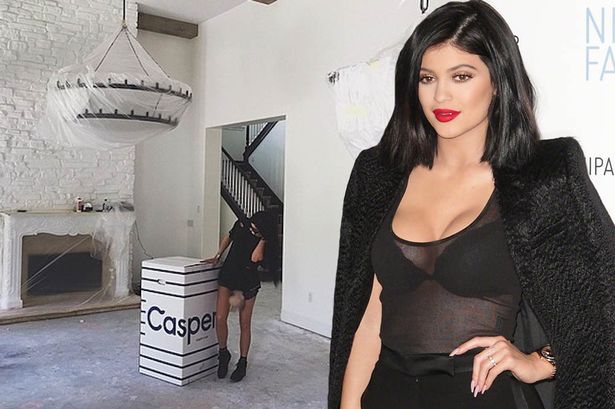 Kylie moving out has been the subject of a few recent episodes of Keeping Up with the Kardashians. Kris Jenner is understandably feeling a certain sort of way about the whole thing. With no more Bruce, and 19 year old Kendall in her new Condo, I’m sure she is going to feel lonely. Back in December Kris was interviewed by Oprah and admitted that Kylie moving out was going to be hard,

Kylie and I are going to be the last ones here. She keeps reminding me daily that she’s 17 and there’s only a few months left until she’s 18.

I ignore her because that’s going to be weird and hard.

However, being the good matriarch she is, as well as sniffing out the potential for future storylines she has been a good sport about the entire thing. She reportedly helped Kylie with the purchase of her home, but did not finance it. Let’s be clear Kylie has her own money.

On the show Kylie can be heard muttering that the second she turns 18 she is moving out. Her 18th birthday is August 10th so the 17 year old is ahead of schedule. Her new house is just a block away from Kourtney and Khloe’s houses so she is not too far. The house is located in an exclusive gated community in Calabasas called “The Oaks”. They are just a twenty minute drive away from Hollywood.

The soon to be 18 year old’s house is 4,900 square feet, complete with a home theater, a pool, 5 bedrooms, 5.5 baths, a whole house speaker system, and a covered patio. Kylie actually made the purchase back in February but was waiting for renovations to be completed before moving in. She posted some pics on Instagram to commemorate the movie in day “project for the next 2 days” “don’t you wish your move in crew looked like mine”

SHE GOT HER OWN MONEY!!

If you were wondering if she can afford it….she can. Trust me. Kylie might be only 17 but she is a beast when it comes to earnings. She only has an estimated net worth of $5 Million but her annual earnings will only continue to increase (as long as she doesn’t pull a Lindsay Lohan).

HAIR EXTENSIONS – Kylie has her own clip in hair extension line called Kylie Hair Kouture distributed by Bellami. Each hair extension set is $249.99. Take a look (I hope they paid Bobby Smurda for the use of his beat – you can’t help but Smurda dance no matter what).

COSMETICS – Kylie also has her own nail polish colors distributed by Opi nail. The colors are called Spar-kylie and Rainbow in the S-kylie.

CLOTHING & ACCESSORIES – She and her sister have a jewelry line with Glamhouse, they have a hand bag line with Steve Madden’s and a clothing line with Pac Sun.

REALITY TV – Keeping up with the Kardashians which just renewed with a deal rumored to be worth $80 million.  Although that is split amongst the entire cast, that is a lot of money to split.

Here are some more house pics!