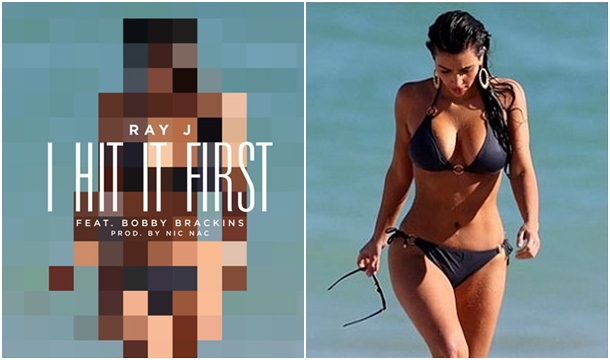 “I Hit It First” Says Ray J [Listen to the Single]

Well, this should end well! You all know that Kim Kardashian and Ray J filmed a now famous sex tape together that was released all the way back in 2007. Can you believe it’s been five years already? It seems like just yesterday we were watching little Ray J blow his load all over Kim. Those were the good ol’ days, huh? Anyway, as most of you know that sex tape was probably the best thing that has ever happened to Kim Kardashian. It put her and her huge ass on the map, which has lead to her becoming one of the biggest stars in Hollywood. She’s got like 20 different reality shows, multiple clothing lines and millions of dollars. That sex tape should get its own star on the Hollywood walk of fame.

Unfortunately, the sex tape didn’t quite have the same effect for Ray J’s career as it did for Kim’s. Ray J’s acting career was a total bust and he hasn’t even recorded a studio album since 2008. But, Ray J is planning on making a big comeback and he is using the ancient sex tape to do it. The “rap star” teased his new song this past Friday titled, “I Hit It First” which will be a single on his new album. He released the artwork for the single, which appears to show a pixilated version of Kim Kardashian. A little creepy? Perhaps. It kind of puts off a, “serial killer” type of vibe.

And if you still have any doubts that the song is about Kim Kardashian, well, the lyrics posted down below just might change your mind.

But we all know I hit it first

I had her head going north and her ass going south

No matter where she goes or who she knows

She still belongs in my bed.”

Clearly, this is the work of a genius! I mean, you just can’t find quality lyrics like that anywhere, folks. I mean look at all the directions he used in just this part of the song! North, south, west…sh*t the dude is spitting! One can only hope that he includes east, northwest, southwest, southeast and northeast, as well! Perhaps, he could just write a follow-up song called; “Directions” and it will just be him rapping directions from Google Maps,

“I turned left on Broadway, yeah I was headed east

Headed to the buffet ‘cause I am hungry for a feast

Have to make a hard right on Skyway drive

How many plates will I have? Probably about five

Shit, I think I am lost, I am headed south

Need to get those endless crab cakes in my mouth.”

I don’t know about you, but I would certainly buy that song, or at least listen to it for free on Youtube! Anyway, Kim Kardashian has not responded to Ray J’s new single and she probably won’t. Why? Because Ray J is probably not even worth her time. She’s got a baby to think about!