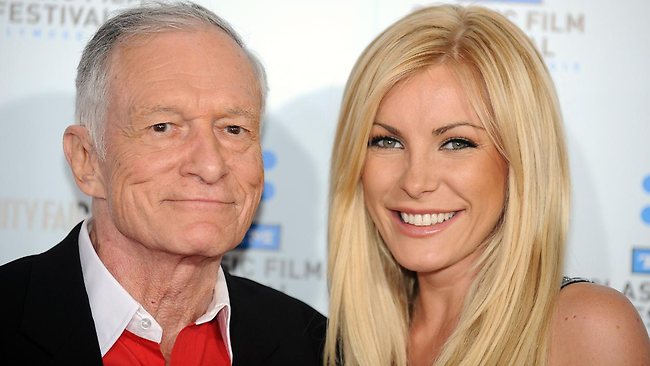 Hef sets the record straight after Crystal Harris called him a 2 second man.  Yesterday on the Howard Stern Show, she told the Shock Jock (..that term is so old but still accurate), that sex with the legendary Hugh Hefner only lasted 2 seconds.  Just like anything that anyone does, that statement spread on the internet like wild fire.

The 85 year old, pulled out his tweet and got busy.

‘Crystal lied about our relationship on Howard Stern but I don’t know why,’ he tweeted last night. ‘Maybe a new boyfriend?’

As I usual do – I went to twitter to pull the tweet pic and it was gone.  I’m not sure why he would remove it.

He continued to stay on twitter and actually answer fans questions, one time tweeting,

‘Crystal convinced me that she adored me, That was the first lie.’

What I didn’t’ see is the detail.  Was it really 4 seconds or 10 minutes?  Did they only have sex once, or was it once a day.  If you are going to call someone a liar, we need some details.

This is now the 2nd time I am feeling sorry for Hugh Hefner.  He shouldn’t try to go on twitter, he doesn’t have to go tit – for tat.  You are Hugh Hefner, you have two new women and all the Viagra money can buy.

Let her go on whatever show, and talk whatever smack she wants.  Her and her comments will be forgotten in a few weeks, if Hugh lets this die down.  Hugh himself on the otherhand will never be forgotten.