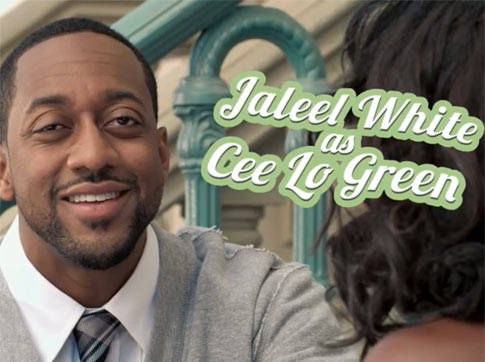 Cee-Lo released his new video for “Cry Baby”.  Rumor has it, do to his busy schedule; he couldn’t star in the movie video himself.  In fact, he didn’t even know that the video was shot.

“I had no idea they shot a video for cry baby, I hear its cool though.”

I mean really?   I was a Cee-Lo fan until I had Rihanna tickets where he was scheduled to

open and didn’t.  He’s listed on the tickets for a show at the Moheegan Sun Casino last month and didn’t show up.  No explanation was given and all I got for my $150 opening act was some stale back up dancers that were no better than the ones I saw on my Carnival Cruise.

I still can’t believe that you can create an album, and they can create a video without you starring in it, or even approving the concept!  Despite his bulbous figure I think he’s spread himself way to thin, and he’s not nearly as big a deal as he thinks he is. “Cee-Lo” come back down to planet earth.

Just like the Rihanna concert, the show must go on, and so does the video.  Kudos to the directors of the video for using Urkel aka Jaleel White.  I’m still a fan after all these years, and he actually has a little talent.  It’s still hard to ignore his Urkel past, in this video he is Stephon Urkel (the smooth alter-ego of Steve Urkel).

DID I DOOOO THAT!!

Here is the video for your viewing pleasure!