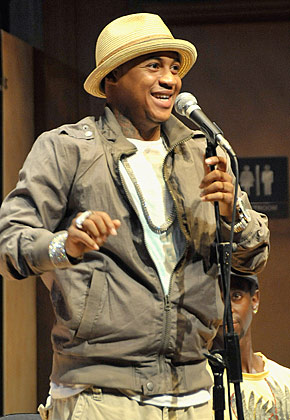 The “That’s So Raven” actor was arrested for drunk driving.  He was arrested at 11:30 PM Friday and released Saturday morning.

He was arrested in front of his house.  I was thinking, that he almost made it home, however he says he never left.  The story that the police have and the story that Orlando has are completely different.

Reports that came out Friday said that Orlando was driving with his pregnant girlfriend and that he posted $15,000 bail.

‘He just has to go to court and attend his hearing.

‘He had been drinking in his house, he had two glasses of wine.

‘He had not been driving and there was no pregnant lady in the car.

‘The car was his friend’s. She was leaving and he went out to talk to her, and he sat in the driver’s seat.

‘He also was not in a moving vehicle, but when the cops pulled up he was sitting behind the wheel.

‘He is going to attend his court date and is innocent until proven guilty.’

So what’s the real deal?  Technically you can’t be in the car with the keys drunk.  So if the story is still true, then he is guilty by law.

Tip – if you are too tipsy to drive home.  Sleep in your car, but put the car keys on the top of the tire under the wheel well outside the car.  This way if a cop shows up, there is clear intent that you had no plans on operating the vehicle.

In 2007 Orlando was arrested and charged for Marijuana possession, so we knew he wasn’t squeaky clean back then.  Let’s hope this as gangster as Orlando gets.