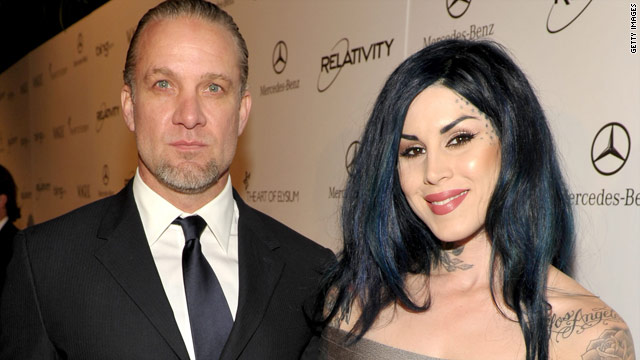 It must be the money, because every time I see Jesse James he looks like a tattooed boob. Really. I mean the guy must be cool as hell to hang out with as a guy. Have a few beers, ride Harley s’ work on cars…but I don’t see what women see in this due, Maybe it’s just me.   Ok f*ck it, instant poll.

Would you bang Jesse James (only women please!!)

Anyway, Kat Von D says that Jesse cheated on her 19 times. This was all revealed ala facebook. If it was 1 or 2 women then a tweet would have sufficedm but facebook gives you more then 140 characters.

In a note called. “Thank You Jesse James” she tries to release her frustrations, sadness and regrets through the magic of the internet.

The note starts off:

Today I encountered the 19th girl to add to the list of people Jesse cheated on me with during this last year.

It’s pretty long but here are the juiciest tidbits:

I know I deserve a big fat “I told you so,” from everyone, and wish I didn’t have to say, “You all were more right than you’ll ever know” but you were.

Not to worry, I’ve gladly paid the consequences for every mistake I’ve ever made, but learned so much from each of them.

Yes, I am pretty tired of getting mistaken for the girl who everyone believes to have broken up Jesse and Sandra’s marriage, just because I have black hair and tattoos like that other gal. That does get a quite annoying at times, and it would be nice to not be associated with her, but that’s trivial in the grand scheme of things.

I think it just made me sad today to imagine him still in that dark place – where seeking validation through the attention of women takes precedence over being a good father, a sincere friend, a better coworker, and a happy individual.

You can read the letter in its entirety here. At the time of press, it was shared 12,740 times with over 3000 comments.

I AND THE REST OF THE WORLD TOLD YOU SO!!

Lesson1: You are not going to change a forty something year old man. Period. Your P-thang ain’t that much of the bomb, where you think all of a sudden that you will be the one and only . 9 times out of 10, once a cheat always a cheat. The more money and fame the more that 9 becomes a 10.

Now that she has no show and no man, let’s hope that Ms. VonD has learned her lesson .