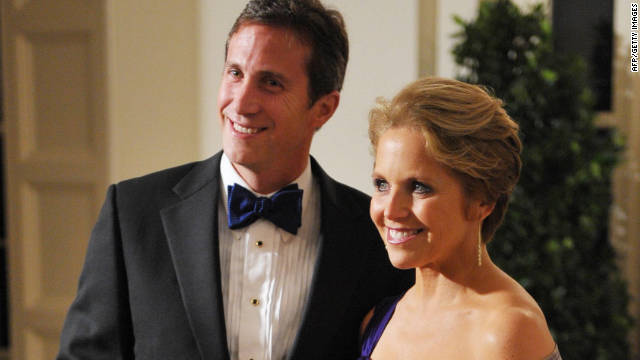 Another day, another break up.  Cougar Couric and boy toy Brook Perlin are over.  I think she got tired of dating someone with the name “Brook”.

Brook was told to pack his sh*t.  He’s currently in the process of moving out of their Upper East Side townhouse.

You are going to love this.  The 37 year old Perlin could not keep up with the 54 year old Katie.  According to the Post,

“Katie is someone who is incredibly versatile and accessible and in high demand.  He wasn’t able to keep up.  After five years, they have decided it was time to go their separate ways.  The bottom line is that she is available and back on the market.”

Maybe the jet setting life was too much for Brook, a CFO at Eco Supply Center, a green building-materials distributor.  I’m not sure if you have met any CFO’s but they aren’t always the most exciting people at the party.

As reported by Fox, three months ago the relationship was on the hairy edge when Brooks began looking for a place to live, but the two decided to make it work.  Couric stated,

“I am in the process of figuring out the future, and so is he. I am really happy in my personal life … but it is complicated.”

As was told by US Weekly by a source close to Katie,

“Brook’s a nice guy, but it was inevitable because they had different priorities and perspectives, and their age difference made it a challenge, too.”

At 37 Brook was probably looking to start a family and Katie has a 20 year old daughter in college and a 15 year old.  That’ is probably the furthest thing from her mind.  Also with a new talk show on the way slated to premier in September of 2012, she will be busier than ever.

With Tyra Banks’ recent split with her banker beau that make two millionaireresses  on the market.  Where is Patty Stinger when you need her.