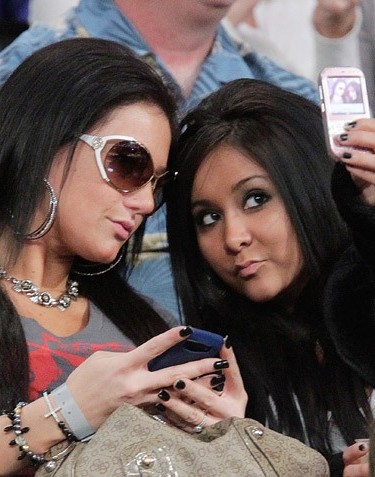 Isn’t this exciting news??? Aren’t you thrilled beyond belief?  Haven’t you been waiting all year for this?

Ok, maybe not, but here it is anyway.  I’m pretty sure it’s not going to be as good as The Pualy D Project but it might be a train wreck worth watching.

As the buzz for the JWoww and Snooki show heat up, ratings for The Pauly D Project continue to drop.  When Pauly premiered back on March 29th he had almost 3 million viewers.  Last week he was around 1.5 million, declining every week.  I still think the show is solid but the poor numbers might hurt Pauly’s earning power in the future.

SNOOKI AND JWOWW AGAINST THE WORLD

In the preview JWoww gets the news that Snooki is pregnant.  JWoww asks,

“How did this happen?”

Ladies and gentlemen this is quality television.  As a fan of all TV I’m not going to judge in fact I will be tuning in on day one….at least the first few episodes.  It all goes down June 21st.   Waaaaa!!