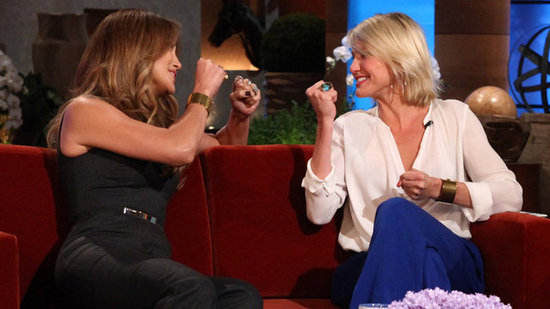 Jennifer Lopez on Ellen, Corrects Adoption & Postpartum Rumors and Talks about her Return for a Third Season on Idol [video]

Jennifer Lopez and Cameron Diaz were both on The Ellen DeGeneres Show today. J-Lo was there to set the record straight regarding some rumors that have been spreading on the web by……ahem ahem…..gossip bloggers.  I am guilty of at least one of them.

The first rumor she addressed was that she wanted to adopt a baby with boy toy caser Smart.  This is not true.  Lopez says,

“I know I’m being misquoted in the press a lot, [They say that] I want to adopt and I had depression when I had babies — none of that’s true.”

“I never really thought about adoption before this movie, ever. I just thought, ‘I’m going to have my own kids.’ I never thought about it as something I would do.”

“After doing the role and holding these babies, you can see how you can take a baby that you don’t know and who, you know, needs a home, You can give them a home a raise them as your own. . . Through the character I came to understand how people do it, because before I never really thought about it.”

The next issue is the postpartum rumors.  She said that it was not true.  The Postpartum part is blown out of proportion.  She was basically just feeling a little sad and that lasted for a short period of time and then she was ok.  She referred to it as the baby blues.

“I had what they called the ‘baby blues,’ which is when your hormones drop and you get very emotional, [In the pregnancy guide What to Expect When You’re Expecting] they’re like, ‘You might be feeling every emotional today.’ I said, ‘Yes, I am. That’s what’’s happening to me right now.’ So those are the two stories that people ran away with a little bit.”

In regards to Idol, will she continue to do another season?? J-Lo’s responded,

“I enjoy it. I really do enjoy it, I miss doing other things. It really does lock you down.”

And regards to the twins,

“Now they’re getting more mobile. They’re about to go to school, I just don’t know. I don’t know.”

I think she has another season of Idol in her because she’s having way too much fun.  Only time will tell.  Here’s the clip below.  Oh yeah….Cameron Diaz was there too.