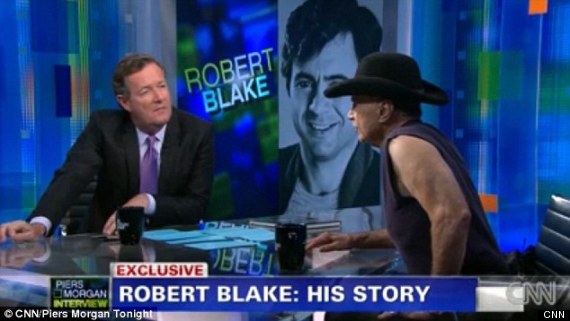 Robert Blake was on Piers Morgan to promote his new book, but things took a very nasty turn.  Blake, now 78 years old, has no problem saying exactly what is on his mind.  Imagine a real life version of one of Joe Pesci’s characters.

The book entitled, “Tales of a Rascal”, is a memoir about Blakes’ career first as a Little Rascal and then as a character actor in the series Beretta and Hell Town.  He stressed during the interview that the book is not about his relationship with his late wife Bonnie Lee Bakley.

He was acquitted in 2001 of her murder and did not want to take this interview there, but Piers wanted to….and it’s his show, so take it there he did.

He asked Blake about the civil suit.  This got Blake a little steamy, and Blake replied,

At one point Blake got frustrated and asked Piers if he even knew why he was arrested.  Then he told Piers to

“do some goddamn research.”

Piers kept poking…..asking him about his living situation.  When Blake lost the civil suit he was ordered to pay $30 million and that forced him into bankruptcy.  So when Piers asked him how he was living, that too touched a nerve,

“I live in an apartment. I told you, I’m broke. I couldn’t buy spats for a hummingbird,

THE BLAKE REALLY LOST IT!

When Piers said that he wanted to get to the truth….”if he can”.  LOOKOUT.  Blake began to lose control.  It was the phrase, “If he can” that sent Robert through the roof.  Blake fired back at Piers,

“You want to get to the truth if you can – does that mean I’m lying to you?”

He sat there pissed with his arms cross, but surprisingly, like someone who’s been through an anger management course or two, he was able to control himself.  He says that he doesn’t want to turn this situation into something special and that he should calm down.  He then proceeds to lash out on Piers, but in a calm, controlled tone,

“My skin is a little bit thin, which is why I stay away from people, mostly; I’ve never allowed anyone to ask me the questions you’re asking,” said Blake. “I allowed you to do that because I trust you. And I would’ve assumed that you — and that guy in your ear –would trust me. And if you don’t, then we’d better start talking about The Little Rascals.”

Here is a small clip of the blow up.  With shows like this Piers will be around for awhile.  Arsenio Hall was home (probably taking notes for his new show) and he tweeted to Piers,

“To my friend Charlie Potatoes: Great TV! Better you than me.”

(Blake called Piers Charlie potatoes, a reference that was used in the movie The Defiant Ones.  It is meant to describe a man who is rich and popular).