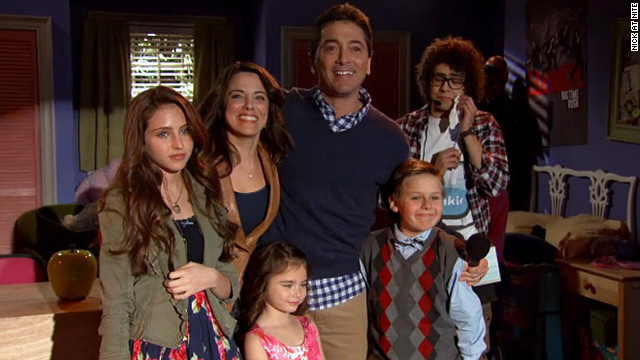 Scott Baio is Back! The Charles in Charge Star Has A New Show on Nick at Nite!

Scott Baio is back on TV…barely.  He will be on Nick at Nite starting this Sunday in a show called “See Dad Run”.

Baio has the distinguished honor of being Nick at Nite’s first scripted original series.  Baio plays a recently out of work actor by the name of David Hobbs.  Hobbs was on a hit show that has now ended and he is tasked with staying home with the kids while his wife goes to work to pay the bills.  BTW his wife (played by Alanna Ubach) happens to be an actress herself.

Baio who is a passionate father himself said the idea of playing a Dad was appealing,

“I related to it easily and that was it,”

From 1984 to 1990 he played the role of Charles in the sitcom “Charles’ in Charge” where he was a live-in baby sitter for a family.   The roles he says are very similar.  Baio says,

“There’s nothing new under the sun. No new ideas, This is an idea that’s not particularly original, but it’s fun and it’s funny.”

Baio says he likes the character because he’s not an idiot like other TV dads similar to himself.  Being a dad has shaped how he approaches the role, with a sense of reality.  He was also an exactor turned father.  Baio explains,

“You don’t really know what the hell you’re doing most of the time anyway, I just sort of get through the day hoping I didn’t screw it up totally. So that’s what I try to do on the show, not screw up my kids emotionally.”

Baio was recently on Access Hollywood where he discussed how he was a huge Romney supporter and says he helps Mittens when he can,

“I’ve done a lot of stuff [for the Romney/Ryan campaign], I’ve met [Gov. Romney] and I’ve given speeches for him and things like that, and donated some money. Whatever I can do.”

I won’t hold that against him.