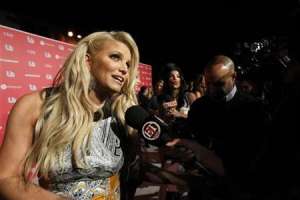 Jessica Simpson to Get Her Own NBC Comedy Pilot.

Looks like Jessica Simpson will be adding an NBC sitcom to her growing empire.  The pilot will be written by Nick Bakay, the man behind “Two and A Half Men”.  It will be based loosely on Jessica Simpsons life.  Simpson often feels like her life is crazier than fiction.  Regarding the show Simpson says,

“I often find myself thinking that no one could ever make up the things that actually happen in my life — so between the real-life elements and a great team of writers, I think we’ll have people laughing!,”

This will be the second project that Jessica will have with NBC.  They’ve decided to give her reality show Fashion Star a second season.  Fashion Star is a show wear thirteen fashion designers vie for a multi-million dollar prize to launch an original fashion line.

Of course Simpson’s father and longtime manager is part of the potential sitcom.  Joe Simpson will be executive producing the show along with Ben Silverman and Nick Bakay. Silverman believes that Jessica is perfect for this role and comedy is a natural next phase for her talents.  He says,

Jessica Simpson is truly a modern-day Lucy with incredible comedic chops.  From running a fashion empire to wrangling her public image as a new mom, we see Jessica’s character approach a variety of ‘everyday’ circumstances that will get audiences laughing out loud.”

It will also get more money in Simpsons bank account.  Simpson’s current net worth is $100 Million.