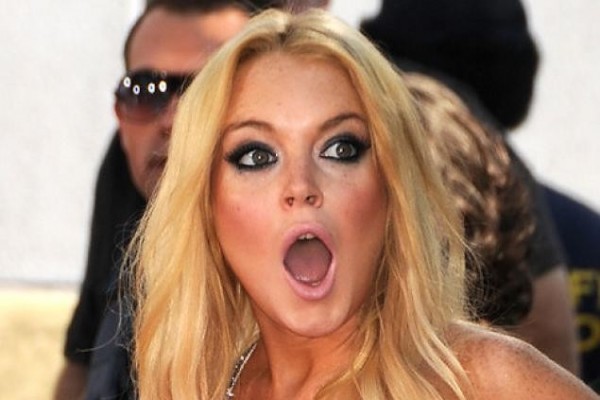 Charlie Sheen invited Lindsay Lohan to make a guest appearance on his show, “Anger Management” the show he created after he stopped snorting cocaine off the asses of strippers around the world. One might wonder why he would invite the train wreck that is Lindsay Lohan on his show, but Charlie Sheen knows how it feels to be a train wreck. He was probably just trying to help the poor ginger out. However, it appears like he may have made a huge mistake, at least if you believe the latest reports coming from the set.

Lindsay wrapped up on the Anger Management set yesterday and now a source is claiming that she was a colossal pain in the ass. The angry source told E! News,

“She was a colossal pain in the ass. It’s a shame, because when she actually gets on camera she is good and has comedic timing. But she comes with so much luggage it’s not worth it.”

It didn’t start off bad, though. The source admitted that Lindsay was perfectly fine the first day of shooting. She was there early, acted very professionally and didn’t disrupt the filming of the show. However, that all changed on the second day of shooting when she was late for almost all of her scenes. Her work ethic was so bad on Tuesday that she had to come in for an extra day of shooting yesterday.

“From the moment she arrived yesterday she did nothing but hold up the production. She would sit in her trailer and stall and she delayed until she up and left for her boyfriend’s concert…She held everyone hostage.” the source claims. The source also told E! News that at one point they almost called the police on her to escort her off set.

Of course, people working for Lohan refute the accusations. They say that Charlie Sheen was extremely happy with Lindsay’s work on the set and that the claims made by the source are not true.

Sure they aren‘t! Lindsay Lohan is just a perfect little angel! She probably even brought the staff donuts and coffee. It’s just the kind of person she is! I do agree with one thing, though. It is a shame that she is throwing her life away because she is a good actress. Remember that Freaky Friday movie? She played the role of her mom flawlessly, that kind of skilled acting is just something that cannot be taught. It’s a gift from Kanye West himself.