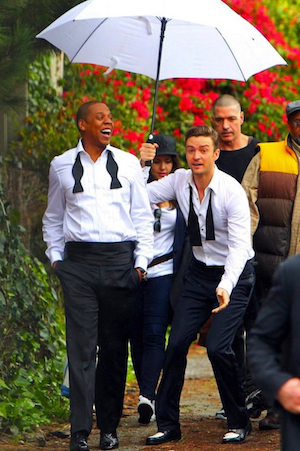 Mr. Timberlake is probably one of the happiest people in the world today. Not only does he get to sleep with Jessica Biel, but his new album, The 20/20 Experience has made nearly 1 million in sales the first week! Which is something to be proud of when you consider almost everything can be downloaded for free these days. Justin Timberlake was “shocked” by how well his album did the first week and he thanked all his fans on Twitter,

Whoa… Speechless. Shocked. Numbers go up, numbers go down. I just hope this album makes your Summer… You already made mine #bestfansever

He also tweeted a very mysterious message where he states that he’s going to find a way to show his appreciation to all his fans. What does he mean by that? No one knows for sure, however, E! Online thinks that it might involve a scavenger hunt for tickets to his upcoming tour with Jay-Z.

Justin is part of a unique club.  One that Adele and a few others belong to.  That’s the club that can appeal to all demographics.  That leads to record sales, which leads to uber success.  The numbers are  backing that theory not only in record sales but also in concert ticket as it looks like JT and Jay-Z might out sell the Kanye West and Jay-Z’s tour of last year.  Kanye might not be feeling this Suit and Tie sh*t but the rest of the Jay-Z’s fans apparently are.

Get out your seat Hov!