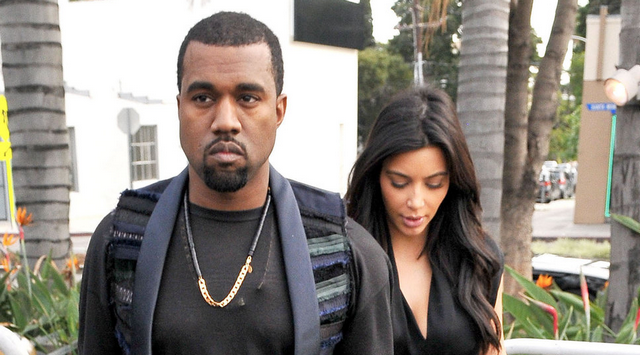 Kanye West loves to hear himself talk and he did a lot of talking yesterday on Ryan Seacrest’s Radio show. During the interview, Ryan Seacrest made the mistake of asking Kanye what was currently frustrating him.

The 36-year-old rapper took this opportunity to defend Kim Kardashian,

Of course, Kanye wasn’t going to stop there. He continued…

“She’s like the most intriguing woman right now. She’s got Barbara Walters calling her like everyday…and collectively we’re the most influential with clothing. No one is looking at what (President) Obama is wearing. Michelle Obama cannot Instagram a pic like what my girl Instagrammed the other day.”

What? No one looks at what the President is wearing because he’s always wearing suits! He doesn’t have time to wrap a fancy scarf around his neck, he’s kind of busy taking care of a freaking country. And what is he even talking about with the Instagram sh-t?

Is he talking about this picture of Kim?

Yeah, he’s right. Michelle Obama can’t Instagram a picture like that, but what exactly does that prove? That she doesn’t need to have thousands of people online tell her how great her ass looks?

Sometimes Kanye makes a few good points in his rants, but I am afraid this one was a big swing and a miss.