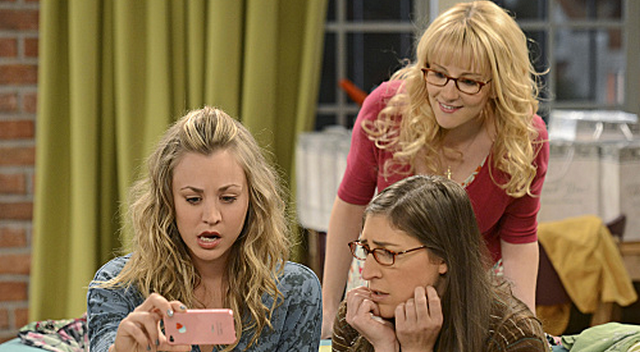 We’re sure when you read “Big Bang Theory” and “Maxim Photo Shoot” your mind instantly went to Kaley Cuoco. However, there is another lady on the hit show who can be “sexy” when she wants to be, and that lady is Melissa Rauch.

She plays a nerd quite well on the show, but she turns into a completely different person when those glasses come off.

This a photo of Bernadette, the character she plays on the show. And this is one of the photos from Melissa’s sexy photo shoot with Maxim magazine. One thing is for sure, Howard wouldn’t know what to do with himself if Bernadette came to bed dressed like that. Melissa also sat down for an interview with the magazine and she revealed that she’s never actually been to the Cheesecake Factory. However, she did spend a bit of time waiting tables just like her character on the show…

“I worked at a sports bar in New York City during college. It was before fantasy football was online, so people would come in with their notebooks. One time I spilled a pitcher of beer all over someone’s fantasy notebook. It really f–ked up his draft.”

The December issue of the magazine went on sale yesterday. You should probably pick it up…for the interesting articles and stuff.