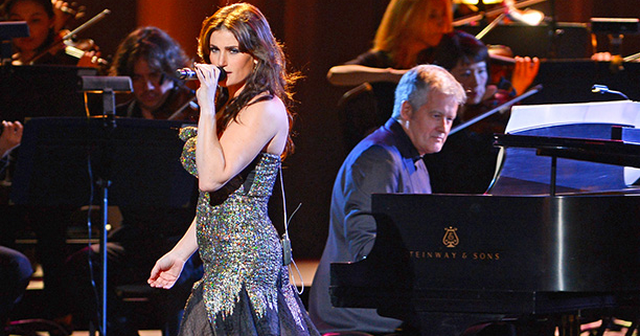 Idina Menzel was extremely excited to perform at her sold-out, one-night-only concert at Radio City Music Hall. So excited that she almost let her puppies slip completely out of her bra!

During the concert, Menzel’s boobs begin slipping out of her leather bra. She was oblivious to this until the audience pointed it out to her while she was in the middle of singing a song from “Rent.” And of course, the 43-year-old Broadway singer handled the malfunction like a true professional. “What? My boob’s coming out? She asked the audience. That’s when a crew member ran on stage to fix the problem, right before Menzel’s nipple had the chance to make a special guest appearance.

Check out the hilarious video down below…

It’s too bad a “bro” was not in the front row. We all know he wouldn’t have warned her of the slippage. He would have just let it happen, and then pulled out his iPhone to record it all.

Oh well, it’s probably for the best. Now that she’s known for “Frozen” it’s probably best she keeps it clean. She probably offended enough parents out there with her, “Well, f–k it! They’re real.” comment.