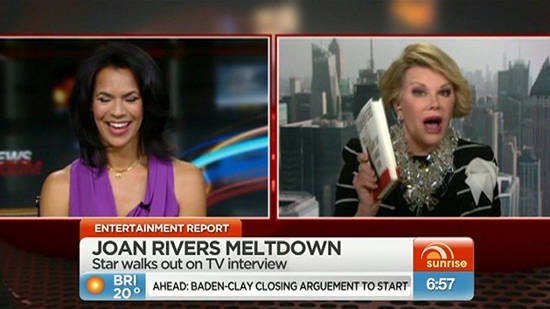 Joan Rivers Storms Out of CNN Interview – She can Dish it, but can’t take it. (video)

Joan shows that she can dish it, but taking it, is a whole different story.

This is in the same week that she called President Obama Gay.  When a photographer asked Joan if she thought we would have a gay president, her response was:

“We already have it with Obama, so let’s just calm down, You know Michelle (Obama) is a trans.”

That is a prime example of her dishing it.  Now the question is can she take it….and now we get our answer.

Rivers is doing a promotional tour to sell her new book, “Diary of a Mad Diva”.  I think her and Hillary Clinton are competing for the DILLIGAF award for selling the least amount of books. On a slow news day, Joan was lucky enough to get some time on CNN where news anchor Fredricka Whitfield drew the short straw and interviewed the 81 year old Rivers. [more…]

WHAT MADE RIVERS STORM OUT?

Nothing really.  She was just being a petulant brat.  Whitfield started off the interview praising Joan for her work, and then she mentioned that E!s Fashon Police, Rivers show critiquing the wardrobe of celebrities, was not so nice to people.  To quote her directly she said that the show was,

very mean in some ways,

This is when Rivers became unglued.  She quickly cut Whitfield off and said,

“I’m sure I say the same things that all your viewers say to their friends sitting next to them on the couch,” Rivers added. “We’re one of the few shows that says ‘that’s an ugly dress.’ … These ladies make $28 million a picture. You really think that Nicki Minaj cares I didn’t like her dress?”

When Whitfield asked her about the fur she was wearing on the cover of her book – she really went off and then stormed out.  The entire time, Whitfield thought it was a stunt.  Joan thought she was being attacked.  She asked Whitfield if she was wearing leather shoes.  When Whitfield answered yes, Joan told her to then SHUT UP.  She did pulled the earpiece from her ear indicating that she was done, and before walking off she said,

“All you’ve done is negative.  I’ve made people laugh for 50 years, I am put on Earth to make people laugh. My book is funny. I wear fur that was killed 15 years ago, I work for animal rights. Stop it with ‘you do this and you’re mean’! You are not the one to interview a person who does humor! Sorry!”

And that was a wrap.  Whitfield later says that Rivers still had her microphone on and could be heard, dropping some unflattering four letter words. Watch – this might be the most ratings CNN news received in years.  Diary of a Mad Diva indeed!
Categories
GOSSIP & SMACK TALK
Tagged
Cnndiary of a Mad DivaE! Fashion PoliceFredricka WhitfieldJoan Riverswalk out