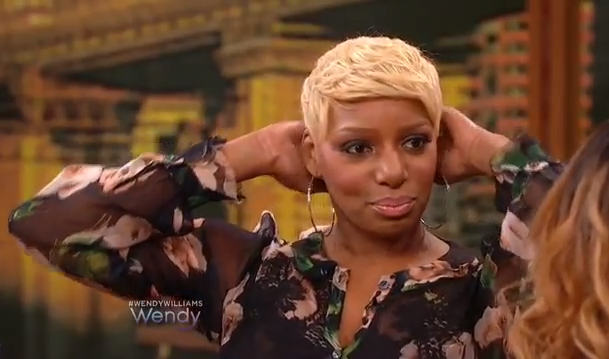 NeNe Goes in Hard on Wendy Williams, Calls Her “Wendell” and Writes Crazy Rant on Her Blog

We all know Wendy is not one to hold back her opinions and in the case of Ms. NeNe Leakes, things are no different. On July 15th pictures surfaced of NeNe with a $10,000 Hermes Birkin Purse. But much too everyone’s horror, she defaced the purse with some of her favorite sayings all in different colors.

The bag was covered with: “I’m very rich bitch”, “So Nasty and So Rude”, “Close Your Legs to married Men” and a few other NeNe-isms. These are all the things that we have heard Nene say throughout her years on the show.

WENDY CONTINUES THE FEUD WITH NENE

Instead of bringing it up on her “Hot Topics” Wendy took to twitter. She asked fans,

‘Hot Question: What do think about @NeNeLeakes defacing her Birkin bag?’

That tweet went out to Wendy’s 1.2 million followers. For some reason or other, she ended up deleting the tweet, but not before NeNe got wind of it. [more…] NeNe took to Instagram and referred to Wendy as “Wendell” implying that she looks like a man, something that Wendy has said previously that she is used to. NeNe directed her to a post that she made on her blog. She posted,

The link directs you to NeNeLeakesOfficial.com where NeNe has written a lengthy post, going in HARD on Wendy. The post states,

Wendy I am sure people think that I’ve done something to you, maybe we had a beef or I slept with your man but none of that is true! I’ve actually only been nice to you! I gave you a beautiful black $3,200 Celine Phantom Bag to celebrate your 500th show but you haven’t spoken of that! But what you have chosen to do is constantly speak negative of me and lie on me!

Then NeNe hints to possibly having her own talk show and giving Wendy a run for her money.

What you need to do is stop spewing hate! When it comes to gossip you are the lowest of the low! I know you hate because I turned down the chance to come on your Talk Show and I am sure you’re scared I will take your place (I know you have heard! Ummhmm wink wink) BE SCARED!

I have a clothing line on HSN coming out in a few days and I know it must be hard for a black woman to support another black woman but you should try it sometime.

PS: My Birkin is being turned into a work of art to raise money for a worthy charity something you fail to mention on your show! I don’t have one Birkin I have five now run tell that WIG.

WENDY AND NENE WERE FRIENDS….

Wendy and NeNe used to be cool. She had Greg and Nene on her show when the two were engaged. Things went sour when a few weeks later, she made some comment about their marriage. That got back to NeNe, which she responded with a tweet,

Then Wendy made some remarks about NeNe on her show regarding a tweet that NeNe sent ironically hating on other Reality Stars. It can be seen at the 10:40 sec mark.

After hearing Wendy go in, NeNe said that she would never appear on the Wendy show again.

Then Wendy got the last blow when she basically said what we had all been thinking last season of the RHOA, that NeNe has to go.

“And now, might I say, NeNe, needs to go, I understand that she’s the highest paid housewife and all that other kind of stuff, but in the course of NeNe being on this show — And I know that she’s the only original housewife left, but, you know, she stayed so long that she went from being likable and loveable, and comical, to being mean, jealous, vindictive, childish. Just childish, bitter — all that. NeNe needs to go.”

I’m sure Wendy will be cooking this beef on her next hot topics. NeNe is trying to squeeze every ounce of fame and money she can from RHOA and this beef with Wendy is helping her do just that. I do think NeNe’s time on the show is over. She’s managed to parlay that reality show into an impressive net worth of $10 Million – However that doesn’t compare to Wendy. Her Networth is a staggering $60 Million with an annual salary of $15 million.