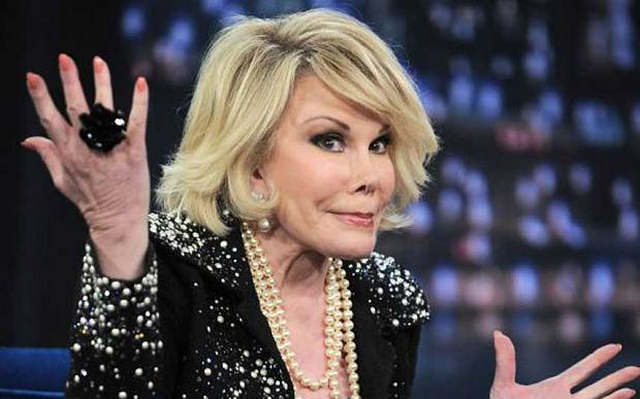 Joan Rivers’ Cause Of Death Finally Revealed, Get The Details Inside It’s now been over a month since the 81-year-old comedian went into cardiac arrest during a routine throat procedure at Yorkville Endoscopy. We now know the procedure was to address her acid reflux problems and evaluate changes in her voice.

During the diagnostic procedure, Joan was sedated with Propofol, and that is where things went wrong. The New York City Medical Examiner determined that lack of oxygen to her brain caused her death.

The official report claims her death was caused by…

“anoxic encephalopathy due to hypoxic arrest during laryngoscopy and upper gastrointestinal endoscopy with propofol sedation for evaluation of voice changes and gastroesophageal reflux disease.”

I think I might die after being hit by all those big words. Let’s just be glad I don’t actually have to read this back to you all. Anyway, the report also revealed that Joan’s death is classified as a therapeutic reaction, which means the death was the result of a predictable complication.

“We continue to be saddened by our tragic loss and grateful for the enormous outpouring of love and support from around the world.”

The doctor who performed the procedure on Joan has left the practice, and the clinic is currently under investigation; however, it does not appear there was any malpractice at this time.