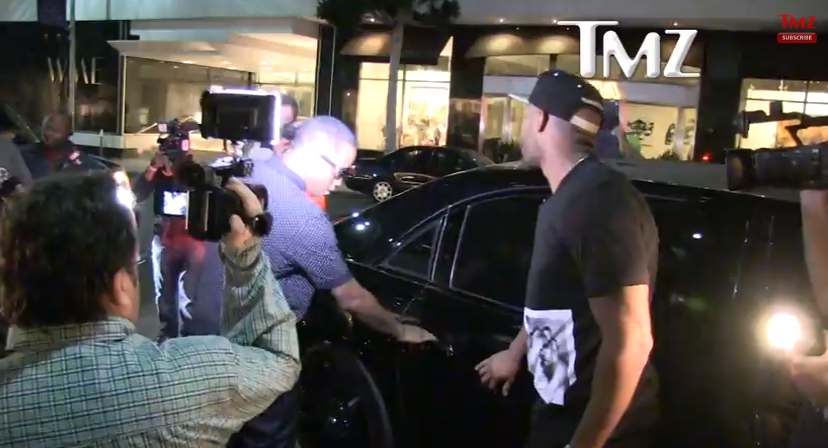 Just a week after Diddy went on record saying that J-Lo’s butt was better than Kim Kardashian’s, he was spotted out with Ms. Lopez in LA. It hit the internet and blog after blog posts gave details that the two partied at Hooray Henry’s after they both had dinner at Mr. Chow’s. It wasn’t clear if it was pre-arranged but the two left within minutes of each other. It was clear however, that they were both at Hooray Henry’s for Jessy Terrero’s birthday. I say….just friends.

Why that was covered to death, what wasn’t covered, until now, was the scratch that Diddy’s Maybach received from the paparazzi when he was leaving the club. Of course there is video footage. This is great.
When you watch the clip below, and you will no doubt have to watch it twice, you can actually see the guy get bumped and scratch the car. The bump happens right at 13 seconds in. The guy with the hat is trying to run behind another photographer to get a shot of Diddy from the left side, when the photographer steps back bumping “hat guy” into the $450,000 car. At 23 seconds in, when Diddy and his body guard point to the scratch and call the photographer over, you can literally see him crapping his pants.

He is thinking that this scratch is going to cost him a year of his salary. Thoughts of all his overdue bills, not having lunch money for a year, getting cut off from strip clubs, and having to move back in with his mom came flooding to his head.

When they ask him to look what he did – he takes the Shaggy approach – It wasn’t me. You can her him ask,

Then watch what Diddy does….

Nothing. How awesome is that!

With a net worth of $700 million, when someone scratches your half a million dollar car you just walk away. That is a business man doing things the way that business man should do them. With nothing to prove, Diddy continued to have a good night and let that man breathe. That took my respect for Diddy up a few notches.

Plus after looking at the dingy GAP hoodie, he probably figured he wasn’t getting any money from that dude anyway.