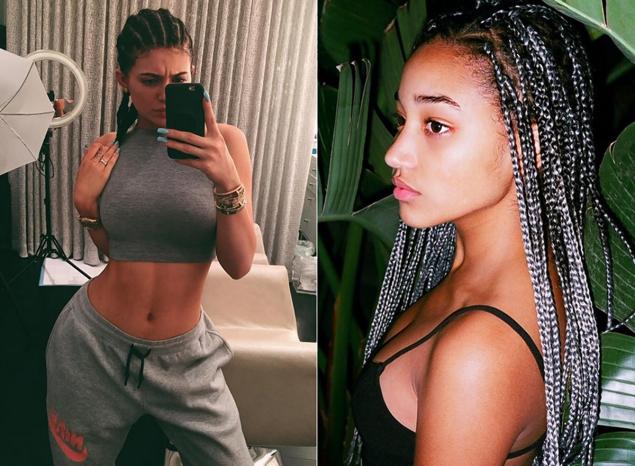 And the Keeping Up With the Kardashians star made a lot of people very angry on Saturday after posting the photo you see below. As you can see, she is no longer rocking those blue hair extensions. She went from mermaid to cornrows in just one day, and the white girl transition was just too much for some people.

16-year-old actress Amandla Stenberg, best known for playing Rue in The Hunger Games, was not a fan of the new look. According to Hollywood Life, the actress left a comment on the photo saying…

When u appropriate black features and culture but fail to use ur position of power to help black Americans by directing attention towards ur wigs instead of police brutality or racism #whitegirlsdoitbetter.

And it didn’t take long for Kylie to respond. She wrote back, “Mad if I don’t, Mad if I do … Go hang w Jaden or something.” Obviously the Jaden she is referring to is Jaden Smith, perhaps best known for showing up to formal events wearing a white Batman suit. He is friends (or at least was) with both Stenberg and Kylie. He actually attended Stenberg’s prom earlier this year…

The mini-war on Instagram between Jenner and Stenberg sparked a big war on social media between their fans. There were a lot of fans supporting Stenberg’s view, but there were also some who felt like people were being unfair to Kylie. There have been several white actors sporting the hairdo, and no one seemed to care when they did it.

But you know what? Stenberg might have landed the knockout punch early this morning with the message you see below. She posted the message to her Twitter account, with the caption, “words by me”

What do you think? Is Amanda taking this too far? Or was she right to use Kylie Jenner as an example?