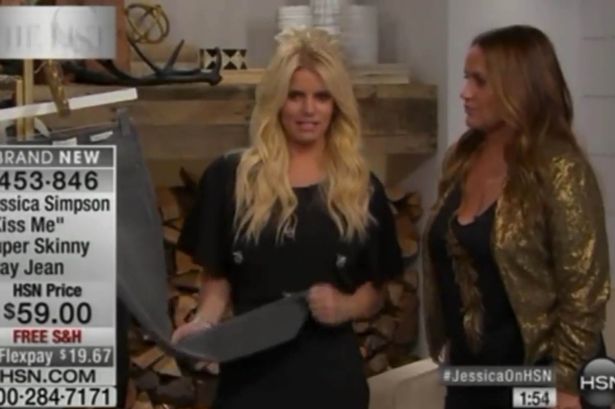 The Home Shopping Network probably got some pretty good ratings last night, all thanks to Jessica Simpson‘s strange behavior. In case you didn’t know, the actress/singer is now a fashion designer, and she was on HSN to sell items from the Jessica Simpson 10th Anniversary Collection.

And even though she managed to produce a “sell out” show, the attention after the taping wasn’t on her clothing line. Instead, people on Twitter were trying to figure out if Simpson was drunk, high on some pills, or just your normal kind of crazy.

Throughout the two-hour show, Simpson acted as if she was about to fall down. She couldn’t stand in one place. It was like she was standing on a boat, just floating out in the beautiful ocean, while everyone else was on the beach asking, “What the f–k is wrong with her?”

During one promotion of her “Kiss Me” Super Skinny Gray Jean, Simpson slurred her speech as she started rambling about how her sister shares these jeans with her husband.

Strange, right? I guess it’s possible she was just REALLY happy to be promoting those jeans. I mean, I don’t know Jessica personally. She might act like this all the time. Maybe this is what happens to people when they eat too much chicken fish.

Either way, people on Twitter put her on blast…

And that last user made a great point. She’s definitely richer today after the super successful show, so she probably doesn’t care what we think about her. People obviously like her clothes.

Plus, we don’t know what’s going on in her life. What if she gets a little nervous in front of the cameras now? So she decided to drink a little bit to calm herself down? DON’T JUDGE HER, OKAY? THAT’S ALL I’M SAYING! YOU DON’T KNOW HER!