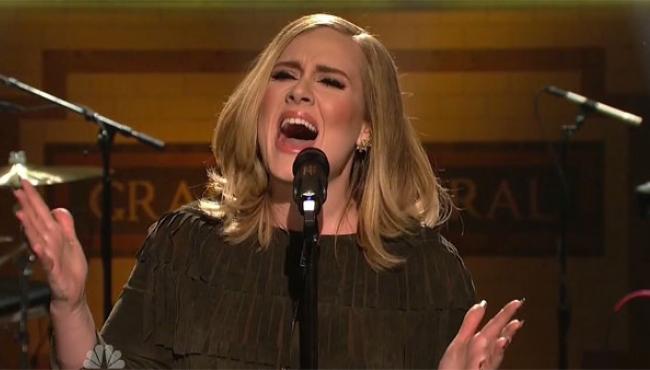 Prepare to be AMAZED! We Have The ISOLATED Vocals from Adele’s SNL Performance and It Will Blow You Away! (VIDEO) I’m sure by now, Adele’s SMASH hit “Hello” is either pissing you off, or it has you feeling warm and fuzzy every time you hear it. Either way, at least in my house, it’s approaching the same amount of plays as that song from “Frozen”. You know…..that one.

I was starting to lean towards thinking just that. I get tired of all the hype and with social media and Youtube, she and her success will be in our faces for weeks to come or at least until Justin Bieber screws up or Taylor Swift does something else good like cure Cancer.  So is all that hype really called for?  Is she really all that?  Isolated vocals will prove it. Isolated vocals make most singers nervous; even the great ones.  Getting access to these vocals is a recent trend as these recordings are captured and then leaked on the internet or people use software to remove all the background enhancements and music so we only hear the raw essence of the singer.  And sometime it’s R-A-W.  They make even the most gifted singers sometime sound like drunks at a karaoke bar or worse. Don’t believe me? How about Mariah Carey last Christmas?

Just having some fun.  However Adele’s vocals are really amazing.  This audio is very impressive and explains all the hype. I concede. She is indeed great. According to Billboard she’s expected to break N Sync’s long standing one week U.S. album sales record. I believe it.

Here are the real isolated vocals from Mariah Carey’s cringe-worthy performance.  Yikes! It was so bad she had to apologize on twitter