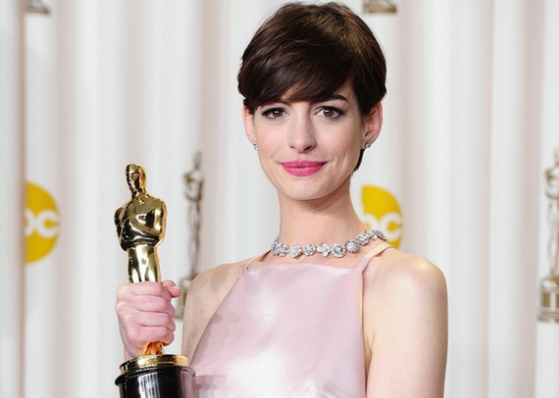 If you’re an actor, receiving an Oscar for your work in a film should fill you with an incredible amount of happiness. It’s what every single performer out there wants.

During an interview with The Guardian, Anne Hathaway admitted she had to fake happiness when she won her Oscar back in 2013 for Les Misérables. And since she is an award-winning actress, pretending to be happy for a few minutes while she gave her speech wasn’t that difficult.

But under the pretend layer of happiness, Hathaway was still trying to recover from the amount of mental energy she lost while filming the movie.

“I felt very uncomfortable. I kind of lost my mind doing that movie and it hadn’t come back yet. Then I had to stand up in front of people and feel something I don’t feel which is uncomplicated happiness. It’s an obvious thing, you win an Oscar and you’re supposed to be happy. I didn’t feel that way.”

She continues by explaining how guilty she felt. There she was, on the biggest stage in front of millions of people, standing in a gown “that cost more than some people are going to see in their lifetime.”

It was a confusing and strange time for Hathaway, and while faking it for a few minute on stage was doable, she couldn’t keep it up during the movie’s press tour.

Her behavior during the tour helped fuel those silly “Hathaway is a fake bitch!” rumors…

“I tried to pretend that I was happy and I got called out on it, big time. That’s the truth and that’s what happened. It sucks. But what you learn from it is that you only feel like you can die from embarrassment, you don’t actually die.”

Anyway, don’t you worry about Anne now. She’s doing just fine. Earlier this year she became a first time parent with her boo Adam Shulman. They had a little baby boy together, “[In 25 years] I’m just going to be staring in awe at my son. I’m a mum for the rest of my life.”