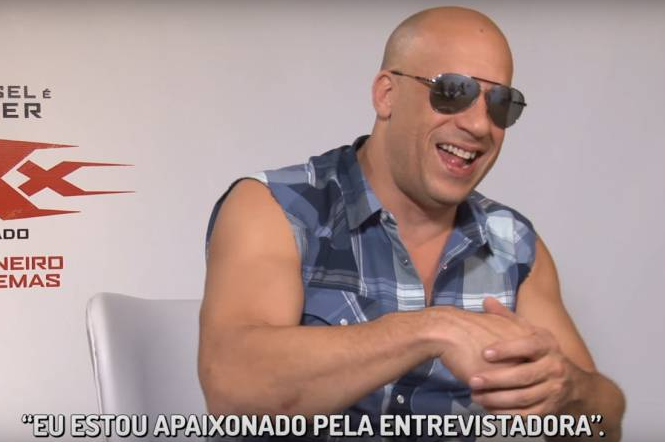 If you are good at reading people, then you probably already know that Vin Diesel is a creepy guy. The type of guy who sends you flowers at work after just one booty call. The guy who gets mad at you for not answering his phone calls. That’s Vin.

During a recent interview with YouTube star, Carol Moreira, Diesel couldn’t contain his creepiness. Moreira clearly did her research for this interview and had some legit questions to ask the movie star, but all he seemed concerned with was her looks.

How are you supposed to do this interview? Bruh. Can you honestly not control yourself? You think just because you’re Vin Diesel, she’s gonna be like, “Oh, yes. Please take me right now.”

And it’s not like he just said it once. Like we mentioned, he stopped the interview several times to point out her beauty.

The interview got really strange near the end when he called her “sexy,” and crawled toward her like some maniac, “I love you. I love her. Man, she’s so f–king sexy. I can’t do this interview.”

Diesel thinks he’s being sweet here. He wasn’t trying to be creepy, so we’re hoping he learns from this. It’s not sweet, Vin. Your compliments come off as sexist and condescending, as if the only thing she’s good for is her body. You treated her like an object. She was basically a piece of IKEA furniture in your eyes, and instead of listening to her words, you were busy trying to figure out how you were going to piece her together.

And we’re not making this out to be a bigger deal than it was. The interviewer admitted she was extremely uncomfortable.

“I was laughing, completely uncomfortable. I was not sure what to do. I just laughed because it was a very delicate situation. I did not like it. At the time I did not know how to react, but you will see that I was uncomfortable that he interrupted my work.”