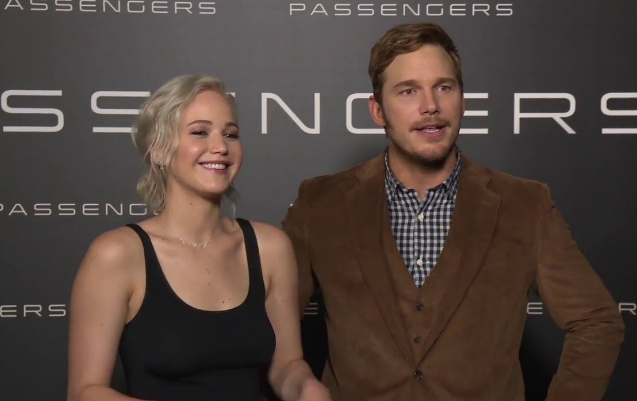 Chris Pratt and Jennifer Lawrence, stars of the terrible movie Passengers, love to joke around and be silly during interviews, but apparently they do have a line you’re not supposed to cross.

During an interview with Australia’s KIIS Summer Fling radio show, J-Law and Pratt were answering your typical questions about the movie. And then they were hit with some more challenging questions. One of those being, “Do you think we’re alone in the universe?”

Pratt gave some really strange answer. Basically, he pointed out how all the evidence and all the great minds seem to suggest it’s likely there is life on other planets, but then he threw all those comments in the trash and basically said, “But I think they’re wrong. We don’t know sh*t.”

I can’t tell if he was joking or not. I hope he was, because if he wasn’t, it kinda makes me like him a little less. If you want to listen to that part, it comes in at around the 46:45 mark.

And you’ll want to stick around to hear the question directly after that, because that’s when things get a bit naughty. One of the hosts of the show asked the two stars, “What’s the most adventurous place you’ve had sex?”

Pratt answered quickly by saying “Airplane,” and after discussing how he got the angles right, it was J-Law’s turn to answer; however, she seemed extremely uncomfortable, “I like being safe. That’s what really turns me on,” she said.

And just as the hosts got ready to ask another question, Pratt and J-Law’s handler jumped on the line and put an end to the interview.

They will claim they simply ran out of time, but it’s obvious they pulled the plug early. You don’t just leave an interview without saying goodbye.