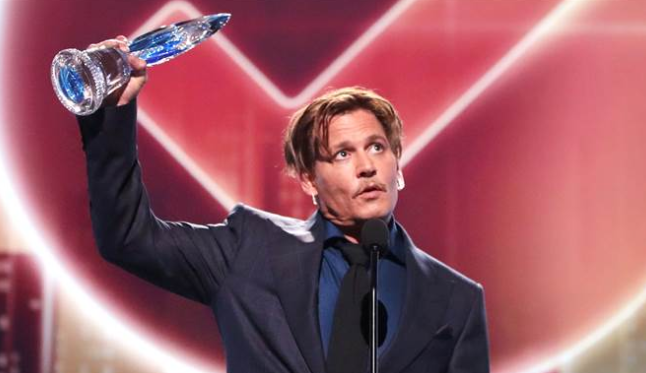 2016 was not a great year for Johnny Depp. Heck, 2016 AND 2015 weren’t great years for Depp. He lost his mother back in May of 2015 and almost exactly one year later, his ex-wife Amber Heard filed for divorce.

She also accused him of domestic abuse, which dominated the headlines for weeks. And she did have plenty of evidence. There was clip showing a drunken Depp breaking glasses and threatening the 30-year-old actress. He also cut his hand open while breaking the glasses, and then smeared the blood all over their bathroom mirror.

It’s clear the dude has some problems, and they probably all come from excessive drinking. The sad part is he’ll probably never get the actual help he needs, because why the hell should he? His fans continue to praise him and act like nothing is wrong.

Check out his emotional speech below…

And while Depp was giving a great performance on stage, his ex-wife was shopping at the 99 cents store. She looked pretty damn happy to be getting those great deals. By the way, their divorce was finalized on Jan 13. Heard received $7 million from Depp, but all of that will reportedly go to charity.