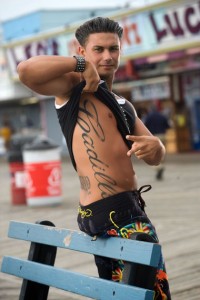 I think Pauly D has it right. He has just finished filming his new Spin-off show. Which tells us two things:

1. January’s season of the Jersey shore is probably the last
2. The situation might have made 10 million in 2010, but Pauly could possibly make more.

Basically the show will consist of Pauly and his entourage so to speak which consists of his long time “boys” Big Mike and his road manager Jerry and of course “E”…I mean Ryan who is just one of his friends who supposedly has a real knack for business. (Forgive the Entourage reference).
This move may be contributed to his Talent Manager Larry Rudolph who began getting Pauly $7000 an appearance almost a year ago. And of course it will be an MTV production. The Jersey Shore has surpassed MTV’s best and brightest as the most watched show on MTV for ages 18 -34, so you know they can’t let that gravy trail pull to far away from the station.

Pauly is the perfect match for a spinoff. He has the most personality and he actually has a job in the entertainment industry which lends itself to interesting plot lines; so depending on how entertaining his entourage is, this could make for some good TV. Not to mention, watching Mike’s mood swings, and hot flashes was like and episode of Desperate Housewives. Somebody get that guy a Moltrin. THE CAAABS ARE HEREEE!!