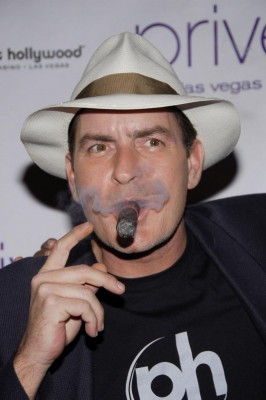 Charlie Sheen has finally done it – Two and a half Men Stops Production.

It was just a matter of time.  I have been very easy on Charlie because let’s face it, He was still getting paid….until now.  Maybe.

CBS and Warners Bros. are finally stepping out and doing what I thought should have been done three rants ago.  They are scrapping the production of “Two and a Half Men” for the rest of the season.

“Based on the totality of Charlie Sheen’s statements, conduct and condition, CBS and Warner Bros. Television have decided to discontinue production of ‘Two and a Half Men’ for the remainder of the season,”

The final blow was Charlie’s interview on a syndicated radio show with Alex Jones yesterday.   Charlie began to publically bite the hand that feeds him.

“There’s something this side of deplorable that a certain Chaim Levine – yeah, that’s Chuck’s real name – mistook this rock star for his own selfish exit strategy, bro,” Sheen said in the radio rant.

“Check it, Alex: I embarrassed him in front of his children and the world by healing at a pace that this un-evolved mind cannot process. ‘Last I checked, Chaim, I spent close to the last decade effortlessly and magically converting your tin cans into pure gold.’ And the gratitude I get is [that] this charlatan chose not to do his job, which is to write.”

Just who is Chaim Levine?  The creator of the Show!! For crying out loud!!

Charlie also let us know just how far he was away from recovery when he called Alcoholics Anonymous a “bootleg cult”.

” . . . I can’t use the word ‘sober’ because that’s a term from those people, and I have cleansed myself. I have closed my eyes and in a nanosecond, I cured myself. . . . It’s just the work of sissies. The only thing I’m addicted to right now is winning. You know?”

“This bootleg cult arrogantly referred to as A.A. now supports a 5 percent success rate. My success rate is 100 percent. Do the math! One of their stupid mottoes is, ‘Don’t be special, be one of us.’ News flash: I am special and I will never be one of you. . . . I’m going to hang out with these two smokin’ hotties and fly privately around the world. It might be lonely up here, but I sure like the view.”

It didn’t stop there.  Instead of issuing an apology and try to get things back in order.  After hearing his cash cow was shut down he wrote a letter to TMZ (How come we don’t get letters).

The letter stated: What does this say about Haim Levine [Chuck Lorre] after he tried to use his words to judge and attempt to degrade me. I gracefully ignored this folly for 177 shows … I fire back once and this contaminated little maggot can’t handle my power and can’t handle the truth. I wish him nothing but pain in his silly travels especially if they wind up in my octagon. Clearly I have defeated this earthworm with my words — imagine what I would have done with my fire breathing fists. I urge all my beautiful and loyal fans who embraced this show for almost a decade to walk with me side-by-side as we march up the steps of justice to right this unconscionable wrong.

Monday the crew of “Two and a Half Men” were scheduled to go back to work.  They were going to do 4 more episodes which would be just enough to complete the rest of the season.

For now, they will play re-runs which happen to still do well in the ratings.

America’s highest paid actor may finally be losing his title.

JUST HOW MUCH DOES SHEEN MAKE?

We addressed that previously in a post.  Here is the bottom line he was due to make a remaining 98 million from the show.  At 2 million per episode and a deal to do two more seasons after this…he just pissed away a lot of money.