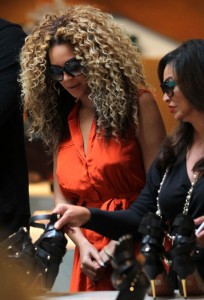 Before we break this down, what did Beyonce buy?

As the news story goes (of course it’s news, we are gossipers!)…..Beyonce and her Mom went to Topshop on Oxford Street in London.  That was their first stop.  With security guards and entourage in tow, Beyonce shelled out $8,000 there before hitting up Selfridges.  For those that don’t know, Selfridges is the No. 1 dept. store in the World. That’s where she really let loose.  They came they conquered they left.  They headed right for the shoe gallery and it was like Christina Aguilera at a Buffet.

“When she hit the shoe section she picked up even more speed.”

She spent $6000 in half an hour.  Not even trying them on, then she hit the clothing.  Scooped up massive amounts of outfits and was gone.

Is this really as bad or obsessive as it seems? Similar to stories of Michael Jordan dropping $50K in Vegas.

Not really? Let’s look at the numbers.

Jay-Z and Beyounce earned $122 Million together last year and $165 the year before according to Forbes, and with albums being released for both this year an over $100 Million year could happen again.

Let’s take a well middle class US couple earning a combined household income of $125,000 per year or $2403 per week. You go to the grocery store and spend $150 on groceries for the week in about 60 minutes of shopping. Basically you spent 6.5% of your weekly income in 60 minutes.

For Jay and Beyonce the numbers are just a little bit better.  They are making a combined income of $2.3 million dollars per week.  Per Week!!! So to spend an equal percentage on groceries as you do – They could spend $152,500 per week.

Not such a big deal anymore huh?