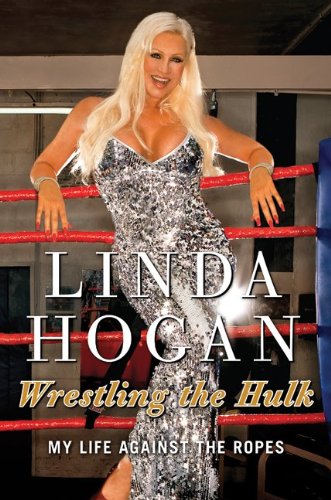 [sam id=”10″ codes=”true”] [facebook_ilike] Linda Hogan is now releasing what I thought was going to be the real deal.  What it was really like to be married to Hulk Hogan.  Can you imagine that?  Oh – I bet you are thinking it’s going to be downright juicey huh?

She says that Hulk Hogan had a drug problem.  I think we all knew he was on something, but this just confirms it.

During a promo tour for the book Linda Hogan reveals some of the…..NOT THAT JUICEY DETAILS.  The book actually sounds like a snoozer.

“From the very onset of our marriage, he took a lot of steroids; he was always on drugs, recreational drugs. He had all kinds of stuff he was doing, along with all of the other wrestlers. Combine that with the huge ego that goes along with being famous,  On top of all of this, my ex-husband was a fighter, and he was a sore loser, so (imagine) going up against somebody that’s like that, 330 pounds, full of rage of testosterone, when they get angry.”

Ok, before I release this next quote – I’m going to say this, Not that I am condoning abuse, but we just got done reading about Latoya Jackson being beaten within inches of her life by a shrimpy little guy.  Now we are talking about Hulk Hogan.  Heavyweight wrestling champion of the World.  The man with the “Pythons”, not to mention this huge force of nature being doped up on steroids.  Weighing in a 6ft – 7 inches, 302 lbs, there must have been some a$$ kicking going on in that house.  Black eyes, broken arms, something….right?

“I had a little bit of shoving; sometimes he’d squeeze my arm or squeeze my face really hard when he was talking to me, or shove me onto the bed. I just tolerated that, but as the years went on it got worse. Broken lamps, hair pulled out, furniture broken, he threw the dog off the bed,”

“It scared me that he might just snap, not realize what he’s doing, he is just so strong. I thought he could kill me. He had his hands around my neck one time on the bed and he started squeezing my throat. He just went into this trance and I looking at him and saying, ‘Terry, stop, stop. I can’t breathe.’

“And it was like, all of the sudden, when he lifted his hand off of my throat, it was like something came over him and came back down to earth. But meanwhile, I was like, ‘Oh my God, this is how I’m going to die.’ At that point, I just knew I couldn’t let myself ever get in that situation again. It was too close.”

I mean, throwing the dog off the bed?  Really?  If this is a tell all book, it needs to be a little more dramatic then throwing fido on the ground.  Not saying that choking and squeezing a ladies face is ok, but it’s not going to sell me books.  I can just look out the window at my neighbors.

Then she talks about the affairs……Boring!

“I tolerated my ex-husband’s infidelity for way too long; you have to live with the lies, the cheating, and the hidden agenda. They’re not going to tell you they’re having an affair, so you don’t know why your marriage is falling apart,” she said. “The first time that I realized (the infidelity) it was ten years into the marriage. Sadly enough, I forgave him and thought maybe we’d have a second chance at it and he would never do that again. He apologized. I trusted his word, believing everything he said, but I shouldn’t have.”

You married an international superstar “Wrestler”.  Come on!  Of course he was sleeping around.  At least he hid it for 10 years.  Boo Hoo.  We are in an age where guys have 12 mistresses.

“Women tend to take all the blame (when things go wrong) and think, ‘maybe I should have lost weight or I should have been skinnier or prettier or smarter.’ He was an American icon, he was huge and famous and look, it happened to me when I was 50 and we had been married 24 years,”

“I’m not crying in my soup, I’ve moved on. It’s not worth shedding one more tear for – I don’t feel sorry for myself anymore. I feel sorry for him. He has got to live with the choices at look at himself in the mirror everyday and realize that he’s the one that has lost out.” Cry me a river.  Now you are filthy rich, you are dating a kid that you met at age 19 and you are famous for no reason.  Did I mention filthy rich!

Also let’s not forget that Hulk Hogan made allegations against Linda in his book.  He called her an alcoholic and said she was abusive to their children.

If I was the publishing company, I would pass on this snoozer.  Not enough drama.  2012, go big or go home.  Sorry Linda but no one cares as much as you think.

We’ve actually already moved on……it’s going to take more then that to bring down the Legacy of An American Icon.