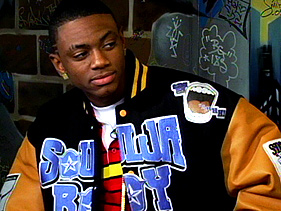 I’m trying to enjoy my Labor Day and what keeps flying across my twitter….this Soulja Boy bull.  Tweets about his video, and posts on Military Times etc.

SO WHAT DID SOULJA BOY SAY IN HIS LYRICS ABOUT THE TROOPS?

Basically his newest video, in typical Soulja Boy fashion is ultra cheap, with him somewhat badly rapping in front of some video game being projected behind him.  The offensive verse goes like this,

F— the FBI and the Army troops
Fighting for what?
B—-, be your own man
I’ll be flying through the clouds
With green like I’m Peter Pan

This is a guy whose name is “Soulja”, who has made his money on viral social media.  Cheap viral tactics that seem to work over and over again.  My take is “Who Cares”?  This is Soulja Boy, not Denzel Washington, not some huge political figure. Look at the video, listen to his lyrics, it’s one sided, opinionated ranting.  You either agree or disagree, you either buy his album or not.  By going crazy over this, Soulja Boy becomes more genius then Jack-ass.

We are the same people who danced to “Superman that Ho”. People have no idea what that means!  In his song “Crank Dat”, the chorus goes,

For those who don’t know, to “Super Man” a woman means that after you have intercourse with a woman, you deposit on her back and throw the bed sheet over her back so it sticks and when she gets up it’s like a cape.

Yep!  That’s right.  So for all you people worried about his lyrics, why start now???

If we keep this up we will be all paying for another $55 Million jet. Relax, and let the boy have fun.  He will probably be “Soulja Who” in a few years….if not months. Peep the video below….Warning – lyrics are not for virgin ears.  Also look at the video of the Marines all dancing to.  “Crank Dat”.  Super Man that Hoe indeed!!