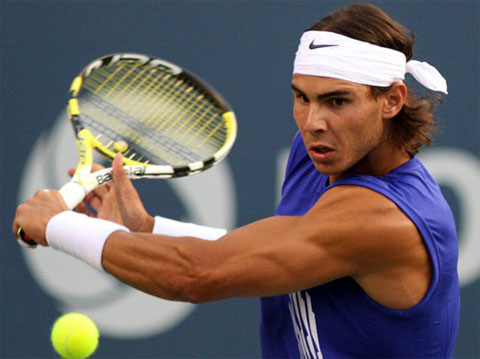 This story gets funnier and funnier as more information is released on this incident.

For those of you under a rock, Nadal is the defending U.S. Open champion.  One of those guys who is hot because he’s FRF (famous, rich and foreign).  During  a press conference in Spain, Nadal caught a super bad cramp.  Not just a bad cramp, but one that put him out of commission.  As he slowly collapses, the 15 journalists that were in the room were immediately joined by the journalists that were watching via TV monitors.

USTA officials rushed in to Nadal’s aid and removed the journalists when his mom Ana-Maria Parera came running by her sons side.  Enough was enough for Nadal.  Trying to end his embarrasement, he began yelling at his mom in Spanish to calm down and leave the room as she was only making things worse. Then in walks a calm Toni Nadal, who is  Rafael’s coach and Uncle, who had been watching on a TV screen while eating in a nearby lounge.

“I thought it was no problem — I was not worried because I know what it was, It was wet and very hot, and he sweated so much. I don’t like when too much people go there. There were enough people.”

Here is the clip – and then a super funny version of the same clip.  Actually they are both super funny.