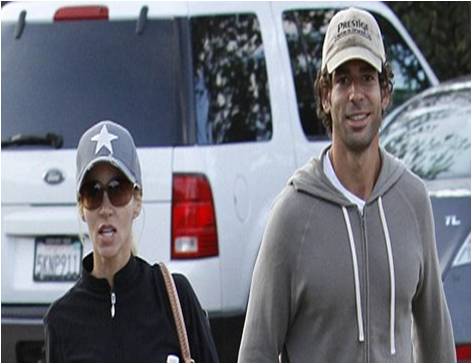 Camille Grammer’s “Greek God” Boyfriend has her Re-thinking about getting Re-Married! Now didn’t Camille herself say that she would never marry again? Those are famous last words.  Now she has gone the way of the Cougar.  The 42 year old is dating Dimitri Charalambopoulos who is only 35, and a strapping young 35 at that.
Their romance has picked up a little speed recently and he even went on vacation with the kids.  Camille is all “bout it, bout it”.  She says,

When asked if she would get married,

‘At some point, possibly yes.’

‘A year ago I would have said I definitely never, I will never enter into that kind of agreement. But now I’ve definitely changed my mind.’

That just means Dimitri is given her thee Ol “bopoulos” just right! Physically Kelsey Grammer doesn’t compare, which Camille actually jokingly made mention of in a past episode of Beverly Hills Housewives.

But I’m sure if they went Wallet to Wallet Kelsey could tip a waiter this guys annual salary without blinking.

Recently on an episode of Piers, Kelsey Grammer told him that Camille wanted to marry the character Frasier, and not him.

‘I think she married me because I was Frasier,’ he told Piers.
‘Frasier had this great wonderful life… he was stylish… and just a little gay. Kelsey Grammer is a different story. You got home and Kelsey Grammer was somebody different.

He also said she was miserable from day one.

Kelsey also went younger marrying a 29 year old flight attendant (former flight attendant  $cha-ching$).  She was quick to defend Kelseys man hood or lack therof, in a statement she made a few months ago to TMZ,

“perhaps the fault lies not so much with the member in question but rather with the inspiration at hand.”

Ohh!
They both went younger and hotter – let’s see which relationship lasts longer.
I tell you one thing….Mrs. Grammer sounds a whole lot better then Mrs. Charalambopoulos.