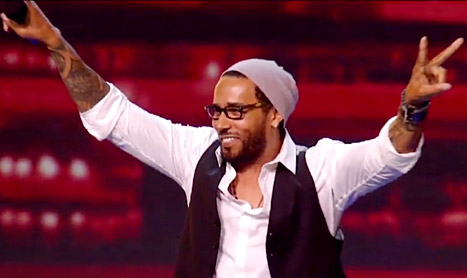 The more the X-Factor goes on, the more I feel like it’s letting me down. I was hyping this show up from day 1, anticipating Simon Cowell’s return to TV. Week after week I’m let down. It’s turning into an exhausting over produced effort.

Thursday Leroy Bell blew it for Fox. He came out and he started singing before he held the mic to his mouth. The show was live and Fox was caught with their hands in the cookie jar.

A Fox rep for the show told the website “The Wrap”,

Ok. I get it and I sort of agree. Not to mention I kind of hate the medleys anyway. You would also hate for a screw up during a medley to send someone home. Leroy Bell did make it, but I’m sure he could kill himself for such a sloppy mess.

We have the 20 second clip that shows the “Lip Sinc” Fail.
COSMO