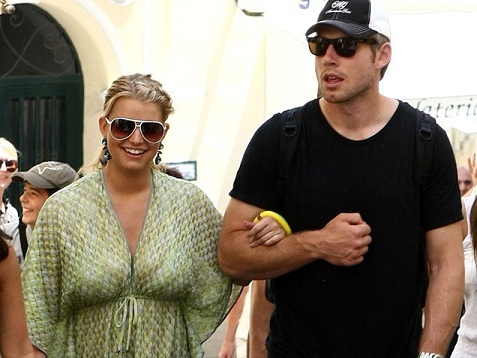 If only every husband had $3 million dollars…..we would have a lot more MIlF’s.

(Hollywood Reporter announced that the deal was not yet complete)

Weight Watchers is putting their money where Jessica’s mouth is.  They are in the process of negotiating a deal with Simpson to lose her baby weight.  At age 31 and pregnant with her first child, I think this won’t be a slam dunk.

Before she announced her pregnancy Simpson was battling her weight and even took criticism for chubbing up.  It all started when she had the photo taken in the now infamous Mom jeans.   The internet was a blaze with criticism and justifiably so.  We were all shocked!!  You can’t go from Daisy Duke to Paula Deen without a warning. Her response to the jabs was light hearted but you know it hit her hard,

“All kinds of women started coming up to me and saying what an example I was setting by not constantly dieting, Everybody fluctuates, but I’m open about my weight and I’m still confident…I didn’t cry about it too much.”

She will marry her fiancé Eric Johnson after giving birth so I honestly think fitting into a wedding dress is enough incentive so the $3 million would just be icing on the cake.

Recently on Rachel Ray, Jessica admitted she has been eating out of control, chowing down on toasted peanut butter and jelly sandwiches.

“And then, I’ll put some salt on my hand like I’m taking a tequila shot and then take a bite of the sandwich.”

A deal with weight watchers is expected to be finalized shortly. Hey it worked for Jennifer Hudson!