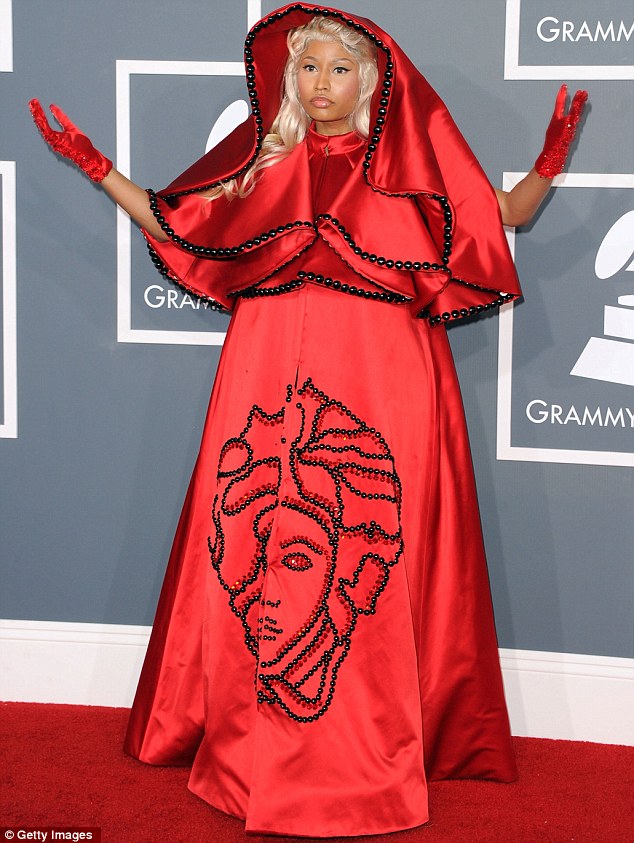 I get it.  Versace made this outfit for her (or at least his fashion house0, for this night.  I totally get it.  However, in the wake of Whitney Houston’s death other artists decided to wear black and toned down cream colors while she insisted on going forward with this Holy Red Riding Hood Theme.  It was outlandish, out of place and out of control.  Even Lady Gaga, queen of the crazy, toned it down, opting for a fishnet over her face.  (Looking like a damn tuna caught in a fishing net..if you ask me). What was even more annoying, was how much Minaj overplayed the entire outfit by not smiling and refusing to take the hood off while even sitting in the audience.  Really? If that wasn’t enough to alienate her audience she continued with the religion theme in a god-awful act.  I was already disappointed in Chris Brown’s performance, but uplifted by Adele’s and Jennifer Hudson’s so I was hopeful that the final act would be like, “Saving the Best for last”.  Not so much.  It was saving the trash for last.  It was just….just….too much.  It was exhausting and the performance itself was horrible.

“She rapped backed by a goth-looking church choir that sang a haunting version of “O Come, All Ye Faithful.” At the crescendo, she was lifted by an invisible rope into the Grammy sky. Shooting flames helped to complete the fiery, head-scratching number.”

Here’s a little tidbit, trust me, it’s enough.  Scroll Down for full list of Grammy Winners: