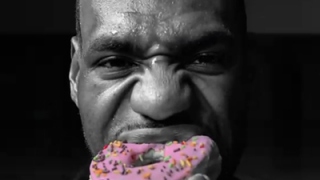 Lebron James is getting that overseas paper now.  Not to mention free coffee when ever he’s in China!

He just signed an endorsement deal with Dunkin Donuts China! Lebron will be promoting both Dunkin’ Donuts and Baskin-Robbins in Asia.  Dunkin donuts has 5400 stores and plans to 250 more stores throughout Asia.  Lebron is well known in Asia.  His Jersey and shoe are the top selling items in Asia.

Things are a little bit different in China.  They have different menu options that reflect the region and the culture.  Yes, they do have pork donuts.

CEO Nigel Travis is very excited about the deal,

‘Donuts are a very flexible product. You can do savory donuts, you can do donuts with shredded pork — that’s in China,’

‘We also have a range of other savory products that we have been testing and introducing country by country.’

HOW MUCH IS LEBRON GETTING?

The details of the deal were not released, however it is believed to be a multimillion dollar deal.  James has earned between $25 million and $30 million per year.

LEBRON GETS PAID FROM FOOD!

His food sponsors currently include: McDonalds, Bubblicious, Glaceau and Sprite!  Of course Lebron was happy with the deal.  He released a statement,

Here are some photos of the exotic flavors!  Enjoy.