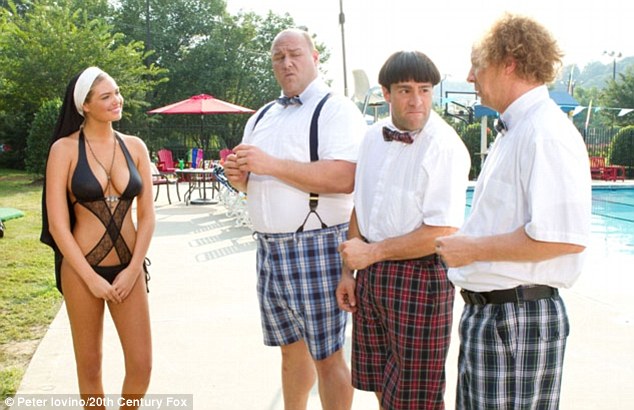 The Three Stooges and Kate Upton’s Nun-Monokini are Getting a Lot of Attention!

For those who have no plans to see The Three Stooges, let me introduce you to, the Nun-monokini! Hold your applause….

This would not look good on just anyone, we are lucky that it’s being rock’ed properly by Sports Illustrated Swimsuit model Kate Upton who is definitely doing it justice.  However, not everyone is on board with the nunnery, it’s offended several Catholic and Christian based groups.

“In the 1950s, Hollywood generally avoided crude fare and was respectful of religion. Today it specializes in crudity and trashes Christianity, especially Catholicism,”

“Enter The Three Stooges. The movie is not just another remake: It is a cultural marker of sociological significance, and what it says about the way we’ve changed is not encouraging.”

Did he just say the 1950’s?  Is this movie not called “Enter The Three Stooges”?.  Relax buddy. Snooki’s even in this film.

FOX RESPONDS TO THE CRITICS

Fox’s response was very similar to mine,

“As the Stooges have proved over time, laughter is a universal medicine. The nuns that Mr. Donohue alludes to, are in fact, caring, heroic characters in the movie, albeit within the framework of a very broad comedy,

And as far as the nun attire, I think we did the audience a favor by letting Kate Upton wear the nun-kini rather than Larry David – it could have gone either way. We invite you to see the movie and decide for yourselves.”

As we learned with the Jersey Shore, any publicity is good publicity so Fox has used this backlash as a promotional opportunity.  Well played Fox!  Peep the trailer below.