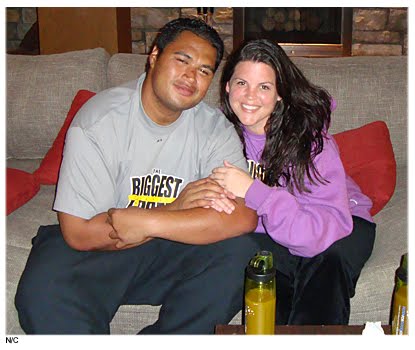 One of my all time favorite Biggest Loser contestants Sam Poueu is back in the news.  Last time we heard from him he was hospitalized after a terrible accident.  Well he is recovering and able to follow through with his engagement.

In just a few short days Sam will be marrying Stephanie Anderson who he met and fell in love while on the show.  They will be getting married in San Francisco on April 28th.

THE FALL THAT ALMOST KILLED HIM

The couple has been through a lot in a short period of time.  Back in September of last year, Sam fell 54 feet from the top of a friends deck.  After eating dinner Sam decided to go for a walk out on the deck and realized that he was locked out.  He started to climb down the fire escape to get back in and fell, 54 feet down to the concrete below.  He suffered a punctured lung, severed kidney , shattered pelvis, a fractured tibia and multiple facial fractures.  If that wasn’t bad enough, when he hit the ground, his brain shifted and hemorrhaged.  This caused him to have a stroke!

After spending three months in the hospital with Stephanie by his side everyday he is on the road to a full recovery and a walk down the aisle.

“He’s doing so well and he’s ready to walk down the aisle with the love of his life,”

What doesn’t kill you will only make you stronger and after completing the Biggest Loser and surviving that fall, Sam and Stephanie are will make a very strong couple.  Watch this video of Sam’s talking about the accident.  You can still see the damage caused to his skull and the loss of his motor skills.  He is lucky to be alive indeed.